For those of you who are fans of the Colbert Report, you will appreciate this pic. For those who haven’t seen the show, I’ll give some background. On the Colbert Report, Stephen Colbert has a segment called “On Notice” — when things make him angry, he puts them “on notice.” (Things that make him really, really angry go on the “Dead To Me” list, which is a whole other story). For example, Professor Michael Adams of North Carolina State University was put “On Notice” for not crediting Colbert as the original source of the word “truthiness” in a newspaper article in which Adams was quoted. On another episode he put “pant cuffs” “On Notice” after showing a clip of Latin superstar Juan Gabriel tripping over his pant cuffs.

And now, thanks to the wonders of the internets, you too can now put things that make you angry “on notice.” See if you can guess which ones were on the original Colbert list and which one I added. 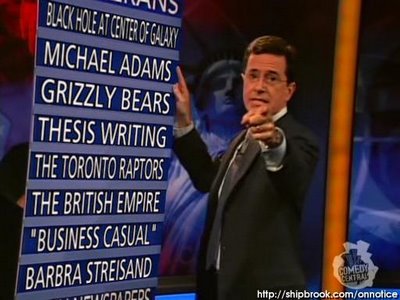 One Response to On Notice