A Picture is Worth a Thousand Words. And a Thousand Pictures are Worth Something Too.

So, a while back I promised to blog some more about my graduation ceremony. And since I took soooo many photos during grad, and during my mom & sister’s trip in general (they were here for my grad, plus a few more days after that), I figured I can do a lot less typing if I just show some pretty pictures. I’m lazy like that.

You already saw a picture of me and my mom at my grad. Here’s one of my & my sister: 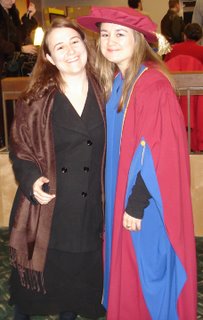 This next one is me walking across the stage during the grad ceremony. Damn, I’m short! Of course, it doesn’t help that the Dean (the guy standing at the podium behind me is about 6’8″ tall!). He was actually one of my supervisory committee members, so it was kind of cool that he was the one reading out our names. 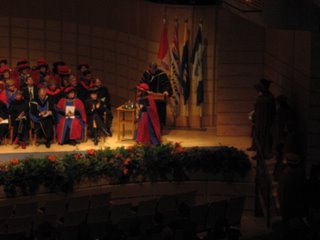 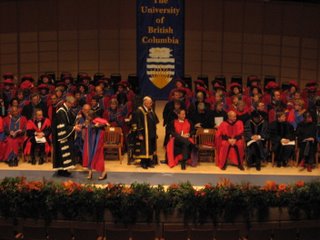 What you may notice in the above picture (if you zoom in really close) is that I have awesome shoes. Let’s take a closer look at those shoes, shall we? 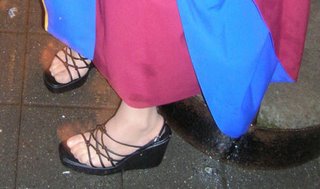 This next photo is of me with the macebearer. He bears the mace. 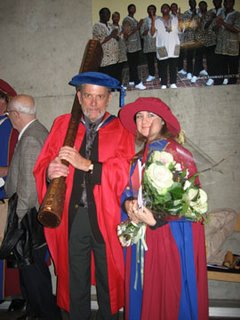 Here is a photo of Kalev, me & Danielle. By this point in the night, my hat (which is way too big for me) has really started to weigh down on my head. So it looks even more ridiculous than it did at the start of the event. 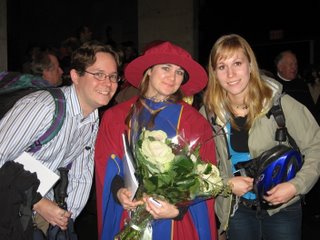 Since it was raining pretty hard, we snapped a few quick picks and then I returned my robe so that we could head off to dinner. And forturnately, I remembered my parking level! Go purple turtle*! 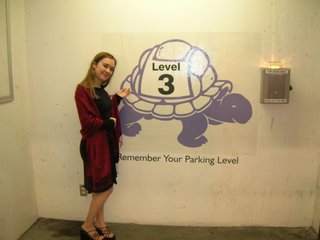 We went to Indian Oven for dinner, since Indian is my absolute favourite food. Each graduate only gets 4 tickets to the grad ceremony (so my mom, sister, Danielle & Kalev were able to attend), but I invited a few more people to dinner. As evidenced by this photo: 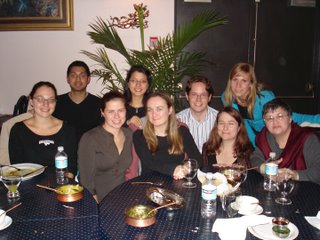 This picture represents the first picture that Erika and I have where she actually has her eyes opened. Big time red eye from hell, yes, but at least her eyes are open!

After dinner, my sister really, really wanted to try a deep fried Mars bar. So we headed to the Templeton, which is conveniently located next to a sex shop: 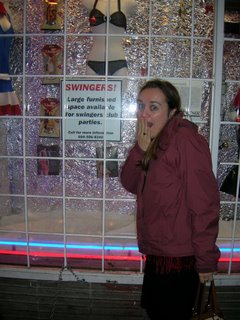 And here is the deep friend Mars bar. ‘Cuz nothing says, “I have a PhD in Nutrition” like deep fried chocolate. 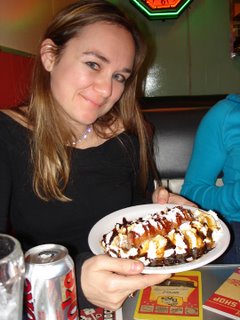 After dessert, my mom, sister & I retired to our room at the Fairmont Waterfront. Here are my sister and I in our luxurious Fairmont robes**. 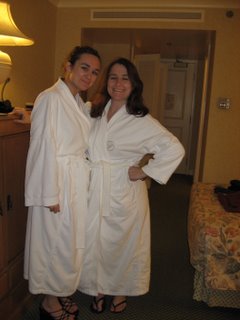 We spent the next day shopping*** and then went to the Body Worlds exhibit at Science World at Telus World of Science****.

Here are my sister & mom – don’t they look happy to be at Science World at Telus World of Science??? 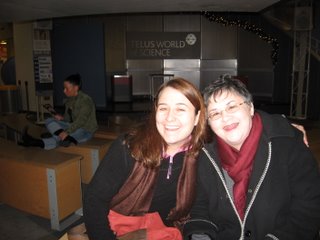 And here’s me. I saw a sign that said “stay off the stage.” So, naturally, I jumped on the stage and said, “Take my picture!!!” 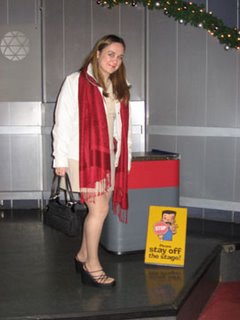 The reason I’m all dressed up in this photo was not that I felt the need to dress up to see dead, plastinated bodies, but because we went to Lumiere for dinner. It was my mom’s 60th bir

thday earlier this month, so we***** wanted to take her somewhere really nice. And since my mom loves celebrity chefs, I thought Lumiere would be perfect. We didn’t tell her we were going there and thought it would be great surprise. When we get there, I’m all excited… and my mom has no idea what Lumiere is. I’m like “Rob Feenie! Iron Chef!!” and she’s like “Nope, never heard of him!******” But the food was unbelievably good, so it didn’t matter. We didn’t take any pictures in Lumiere because it’s mostly rich people in there and we didn’t want to let on that we are poor people in a rich person restaurant*******.

The next day we headed to Victoria, because my mom wanted to go to the Empress for Afternoon Tea. Yes, we drove half an hour to the ferry terminal, took an hour and a half ferry, then drove another half an hour into Victoria… to have a cup of tea. And some sandwiches. And strawberries and pastries. On the plus side, Victoria wasn’t under a boil water advisory like Vancouver was. Of course, we were having tea, so this is rather a moot point.

Here is me, eating some strawberries which had, presumably, been washed in E. coli-free water: 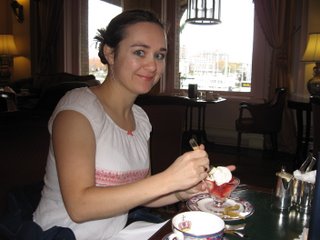 And here are all three of us: 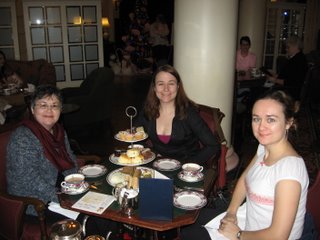 And, for the record, I bought that shirt at the Sally Ann thrift store. They have some really good stuff for cheap (as long as you don’t mind dealing with the crazies there).

Then we went on the ferry back to Vancouver. And it was rush hour. So it took us twice as long to get back to the hotel from the ferry terminal than it did to get there in the morning. And my sister and I went to Tojo’s for dinner. And I got them to make yam tempura rolls for me, even though they weren’t on the menu. Because I am special like that.

And the next day, my mom & my sister flew back home. And it was lucky that their flight was in the a.m., because that night was had a blizzard and flights were delayed/cancelled out of YVR. Because it was my neice’s birthday party in Toronto the next day and it would be highly disappointing if her own mom was stuck in Vancouver!

*We were parked in the Rose Garden parkade. Which evidentally thinks that we need cute cartoony animals to help us remember where we parked. We were in Purple Turtle. Not to be mistakend for Pink Bunny Rabbit, or Blue Hippopotamus. And Yellow Elephant never forgets his parking level!

**Those robes were so not luxurious. Highly disappointing in the luxuriousness department.

***Not very exciting, other than that my mom bought me a new coat (mine had a hole in it), a new purse (as I was, apparently, carrying a summer purse around – the horror, the horror!)