I have made a decision and that decision is this: I am never going to buy wrapping paper again.

This isn’t because I’m cheap frugal (which I am), nor is it due to my abject poverty… it’s just such a friggin’ waste! I recylce, I always print on the back of previously used paper, write notes on old envelopes, bring my own bags to the grocery store and a travel mug to Timmy’s, so what am I doing buying paper (probably made in a sweat shop from virgin paper) that is merely going to be ripped off and thrown away (and probably not recycled, if I’m not there to rescue it from the garbage!) Now, this doesn’t mean that I won’t wrap presents — I LOVE unwrapping presents!! But I’m just not going to wrap with wrapping paper. I know that many environmentally conscious people will wrap their presents in newspaper, but I wanted mine to look a little nicer, so I wrapped them in shiny magazine pages! And since the only magazine I had on hand was the free one from the BC Liquor Store*, that was what I used. Fortunately, it is the holiday issue and a surprising number of ads had pictures of red bows in them, making it sort of look like I had bows on my presents. 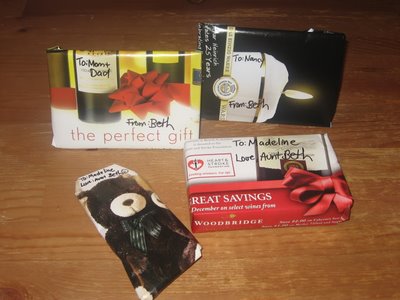 Do you think my parents will get the subliminal message on this gift? 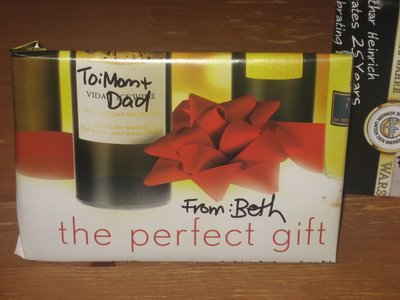 And I even found a picture of a bear for one of my neice’s presents: 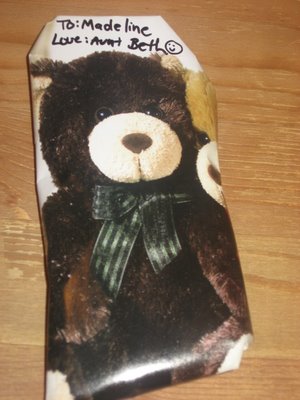 Of course, her other present has a picture of a bottle of booze on it. But it’s folded over so you can’t really tell what it is. Plus, she’s only 2 – she’ll never know, right?

*which I totally got for the *recipes*, btw.

One Response to Gift Wrapping That Would Make Al Gore Proud