Being a good Pastafarian, it was important that I got some good Christmas booty (not booty). And good booty I did receive!

First of all, Kalev & I had a wicked good dinner, the ingredients of which were purchased at Urban Fare in Yaletown, where Kalev informed the cashier that it was “our first Christmas together.”*

Here we are enjoying our wicked good dinner: 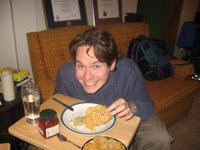 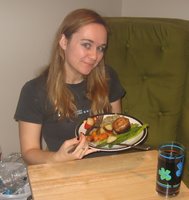 Now, onto the booty! As for gifts given, most of the gifts I gave were things that I made**, although I did purchase a few books, including chicken books for my dad from the American Poultry Association***, Rob Feenie cookbooks for my mom & sister****, and the Gospel of the Flying Spaghetti Monster for Kalev. Stuff I made included baked goods***** and these wicked cool shot glasses: 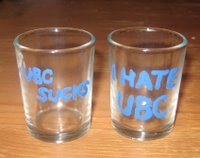 Evidence that I made these myself include these artsy self- potraits****** of me with a paintbrush: 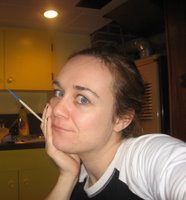 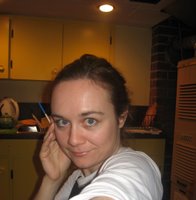 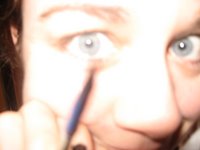 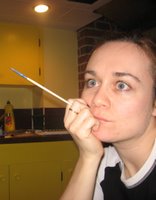 I’m also making something for my roommate, but don’t want to mention it here on the off chance that she actually reads my blog. She’s not back until the New Year, so I haven’t made her present yet. But I know exactly what I’m making and it’s going to be super cool!

I got spoiled with a lot of cool gifts. Kalev got me a paper shredder (which I have been dying for!) and books 4, 5 and 6 of Y, the Last Man (which I have been dying to read since he first introduced me to the series). My parents sent me a Chanel lipstick palette ******* and money for a Magic Bullet********. My sister got me a watch, which I’ve desperately needed since my apartment ate my old one. And my niece, as usual, got me awesome stuff! She’s quite good at chosing presents, especially considering she is only 2 years old. She got me this T-shirt: 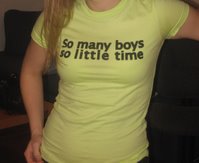 and this cold virus soap dispenser:

She liked this soap dispenser so much that she got one herself too. It’s blue. We like blue.

My roommate hid a whole bunch of stuff in our closet and called me on Christmas to inform me of its presence. Included among the closet booty were this awesome picture frame she made for our Snow Rat picture:

and ball in a cup. A few weeks ago we’d seen this on Family Guy:

I have no idea why we found this so freaking funny, but we couldn’t stop laughing. And so I got ball in a cup. But my ball isn’t attached to a string, so I need to worry if I don’t catch the ball!! 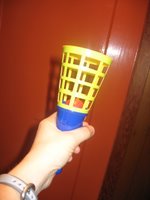 Anyone wanna come over and play ball in a cup with me?

*While technically true, it was not in the way that the cashier thought. So we enjoyed a good laugh at her expense. We are nice like that.

**Because it’s so much more personal that way… not because of my abject poverty, why do you ask?

****To commemorate our trip to Lumiere.

******This is why I shouldn’t be left to my own devices too often. I get bored very easily.

One Reply to “Christmas Booty”