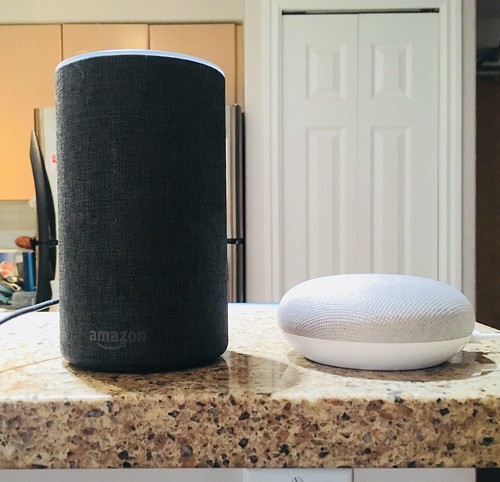 A few weeks before Christmas, Scott came to my place with an Amazon Echo as an early Christmas present for us. Then I got a Google Home from my sister and brother-in-common-law for Christmas! And then Scott got me a starter kit of wifi-enabled light bulbs that can be controlled by the Echo and/or the Home. So (a) I was spoiled at Christmas and (b) I can now walk around my condo speaking various commands and having things happen and I feel vaguely like I’m in Star Trek. Except that what these “smart home” devices can do is far more limited than all the things I want them to do. As one of my colleagues at work, who also has a Google Home, said, “I’m not too worried about the robots taking over yet.”

Things that I can get my smart home devices to do just by saying words aloud:

I’ve also set up my bedroom lamp to slowly come on in the morning to simulate a sunrise, in the hopes that it will ease me into waking up.

Stuff my smart home devices do, but poorly:

Stuff my smart home devices won’t do that I want them to do:

That last one is irritating, because sometime you want to do something like: turn on the lights, set them to cool white, turn on the music and set the volume to 50%. But the Echo or the Home won’t respond to all those commands if you issue them in one sentence – it will only do the first thing. You have to say each thing individually and you have to say “Hey Google” or “Alexa” before each one. Similarly, I can’t get Google Home to add more than one thing to my shopping list at a time. I read online that if you pause between each item, it will add them as separate items, but that didn’t work for me. When I tried, it only managed to separate out one item: 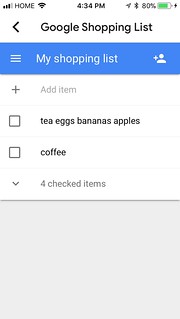 I tried say “comma” in between each word, but it listed everything as one item with commas: 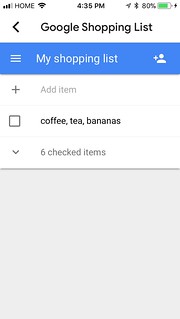 And I tried saying semicolon, but then it just wrote out the word “semicolon”! 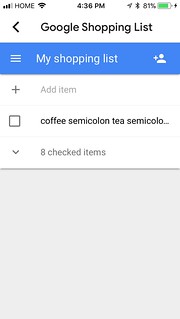 Also, it irritates me that I can’t change the default voice on either device. I changed the voice of Siri on my iPhone to a British male ages ago because I don’t like that digital assistants default to use female voices and reinforce stereotypes of female subservience, but neither the Amazon Echo nor the Google Home will let you do that7.

Anyway I’m sure these things we get smarter as more and more people use them (and yes, I know that I now have two giant corporations listening to everything I say). For now, I think I’m going to get myself a few more my wifi-enabled light bulbs so that I can use my voice to control all the lights that are a pain in the butt to switch on and off right now and some “smart” outlets

to control a few other devices. Now if only they would invent a wifi-enabled self-cleaning litter box!