We are three weeks into my hockey season…

… and I’m leading my division in points. For reals. Here’s proof: 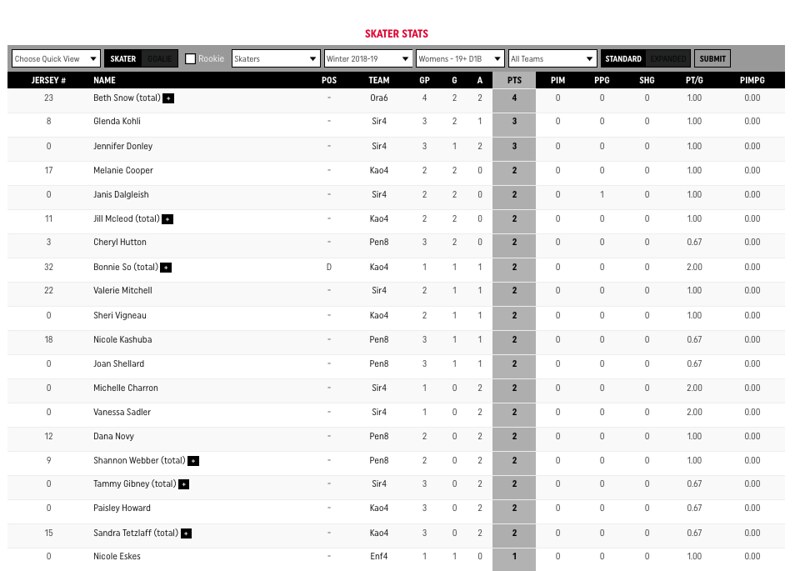 I’m really just recording this here because I know it won’t last for long1! I mean, last year I only had three points in the entire SEASON in this division, and right now I’m leading the division with four points in four games – and two of them have been goals! And one of those goals was a really nice goal, too! Like, my first goal was me firing it hard, but just right along the ice (like I didn’t even manage to lift it like 1 mm off the ice), towards the net as I crossed the blue line, just to try to get the puck in deep as two defence were coming at me – thinking maybe if I were lucky, I’d get a rebound for my linemate. But instead it just slid through the 5-hole! But my second goal was a beaut – I was standing at the back door and my linemate passed it from the corner, right through the crease and I actually managed to (a) receive the puck (can’t say that I always manage to take a pass well), (b) paused long enough to look at what my options were (instead of my usual move, which is to panic, and shoot the puck right at the goalie), (c) notice that there was some available net just over the goalie’s right shoulder, and (d) actually lift the puck right in that spot. Lifting the puck is somewhat new to me – it’s probably thanks to the combination of taking a hockey camp a couple of summers ago, getting a better stick, and actually working out so I have some power – so I was pretty chuffed. Also, it ended up being the game winning goal, so that made it all the more sweet!

Anyhoo, as I said, I don’t expect to be on the top of this list for very long, so I’m basking in the glory of leading the second from the bottom division in beer league hockey while I can!