Cleaning Is Hazardous To Your Health

And this, my friends, is why I don’t believe in cleaning. 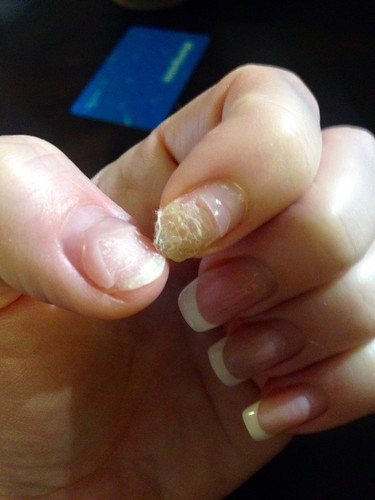 I suffered not one, but TWO broken nails1 from cleaning this evening! TWO! Clearly the lesson is: I should never clean stuff. And I should probably go and get a new set of nails done. But not ’til after the playoffs.

My manicure one month later

Hey, remember that time that I got my nails done all fancy like? That was almost a month ago and my nails are still, to my great surprise, perfect! Of course, near the cuticle you can see that my nails have grown a bit in the past month, but other than that, they are perfectly shaped and as shiny as the day I got them. And this is despite sticking my hands in hockey gloves for several games, washing dishes, baking, and other such potentially nail breaking activities. So props to Crystal Nails in New West1, where I had these done!

On Monday, I decided to treat myself to some fancy nails, as I had my grad photos taken that day1 I figured that since I’d be holding scrolls and flowers and whatnot in my grad photos, I should have some nicely French manicured hands. And it turns out the only thing that looks good in my grad photos are my nails because I am the least photogenic person EVER2. So, yeah, this blog posting is one in which I talk about something extremely inconsequential.  But it’s NaBloPoMo and the pressure of trying to blog every day is giving me blogger’s block. Just be thankful I’m not writing about my new iPhone yet again!

This is the longest my nails have ever, ever been1:

Like, see how you can see white at the end of my nails?  I’ve never had that before!

For as far back as I can remember, I’ve always destroyed my nails.  Sometimes I’d bite them, but often I would just rip them – my nails are pretty thin and easily ripped, so if I ever managed to grow them any length, they’d usually split and if I didn’t bite or rip them to get rid of the split bit, they inevitably catch on something and rip right down into my finger, which hurts like a sunnovabitch.

But for reasons known only to the FSM, a few months ago I started to grow my nails.  If I think back, I think I was on a nail polish wearing kick and when I wear nail polish, I tend not to bite or rip my nails2.  Now that they’ve grown to a reasonable length, I kind of like them and so I’ve been wearing nail polish all the time in an attempt to keep them long3.

I do, however, have one problem nail.  The index finger on my right hand has this really annoying split in it and I just can’t get rid of it (you can sort of see it on the right side of the photo):

At first I was trying grow the nail out so that the split would reach the point where it was past the end of my finger and I could cut it off. But instead the split kept going further and further down my nail!  I even bought nail glue to try to hold it together to give it time to grow out, but the glue inevitably didn’t hold more than a day or two. My friend Kim pointed out that once my nail reached any length where there could be pressure on the nail, that pressure would, of course, make the split go further down my nail (as pressure on either side would cause it to separate more), so then I trimmed the nail as far down as I could and kept trimming it, hoping to prevent the split from splitting further.  It’s helped a bit, but I just can’t get that last little bit of the split out. Honestly, this stupid nail is consuming far more of my attention that is even remotely appropriate.  And now, if anyone is actually reading this most boring of all blog posts, it’s consumed your attention unnecessarily for a whole paragraph too!

The other thing that has come up with this whole nail growing thing is that I discovered that I must have been using up a lot of my anxious energy by biting/ripping my nails4 and now this anxious energy is trying to find a new place to go.  And the outlet it has found – scratching.  If I have a cut, I just can’t resist picking the scab5.  If I don’t, I find myself absent-mindedly scratching at my scalp.  Seriously.  Very weird.  I feel like I should be on A&E’s Obsessed6.  Anyway.  These are the thoughts that have been floating around in my brain of late and I’m hoping that writing them out will get them out of my brain!

And so ends the world’s most boring blog post.  I’ll try to post something a little less vapid and with more substance – you know, like about hot hockey players or what I’m naming my various electronic devices – for the rest of the month.