My back is aching. As are my neck* and my legs. I also have a headache. Perhaps it was the 5K I ran yesterday. Or the ball hockey game that followed the run. Or the night of drinking $2 Coronas** and dancing. I feel like I’ve been in a car accident. Oh, wait, maybe it was the accident I was in yesterday on the way to the 5K… OK wait, I seem to be getting ahead of myself. Let’s begin at the beginning.

Thursday night found me at the MA defence party of a person I didn’t even know***. And I ran into a girl I know who I had last seen at a different Master’s defence party. Appparently the two of us just travel around Vancouver, celebrating defences. Friday consisted of a 6K jog (my last run before my 5K race), lunch with a friend, consignment store shopping****, a game of ultimate, and then dinner and drinks.

Saturday involved a sushi dinner and tickets to the Canucks game! It was the last pre-season game and it was great… up until they lost in OT. Which, coincidentally, was what happened the last time I went to a Canucks game. As is my custom, I offered my “willing womb to various Canucks as their on-ice performance dictated.” Specifically, after Daniel Sedin scored his second goal, I decided that I would, in fact, sleep with him if he scored a hat trick. And if his twin, Henrik, who had assists on Daniel‘s two goals, got the assist on this much-needed third goal, I’d sleep with him too. And that’s saying a lot, since you know how I feel about the Sedin twins! Naslund also had assists on the first two goals, but I decided I didn’t need him to get a third assist to make him sleep-with worthy*****. I think if Daniel had been made aware of my offer, he would have tried harder to score a third goal. The game was tied 2-2 at the end of regulation time, and the stupid Edmonton Oilers scored in OT to win the game. On the plus side, I was quite impressed with the play of the back up goalie, Flaherty******, so hopefully having two solid goaltenders bodes well for the season.

Sunday started off with a bang… literally. I was on the bus on my way downtown to the Run for the Cure… I’m sitting there, reading my book and minding my own business when I hear some of the other bus passengers scream and then there’s a nasty crunching noise and the whole bus shudders. We were going along W. 4th Ave, headed through the green light and this car came barrelling along Burrard St., missing not only the RED LIGHT, but also apparently not noticing the BUS! How exactly you can not notice a bus is beyond me. According to the bus driver, the car was doing at least 80 km/hr… just booking it along the street and slammed right into us. And then a car that was driving parallel to the bus crashed into the first car and the bus as well. The whole thing was totally strange and not at all a good way to start the day! We had to wait *forever* for another bus to come along, as the 4 ambulances, 5 police cars and 2 fire trucks******* had blocked off the intersection and didn’t let anyone through for quite some time.

Once we finally got on the next bus, people were all taking about the accident and someone said that it was a Porshe that had run the light. I hadn’t actually looked at the car (I was more looking at the driver, who was bleeding rather profusely from the head). I even told a few people that the bus I was on had been hit by a Porshe, based on what the other bus passengers had said. As you can see from the photo, it was most definitely *not* a Porshe that hit us! I think this just goes to show you how reliable eyewitness evidence can be!

These photos really don’t do justice to the amount of damage that was done to the car… but they are better than no photos. 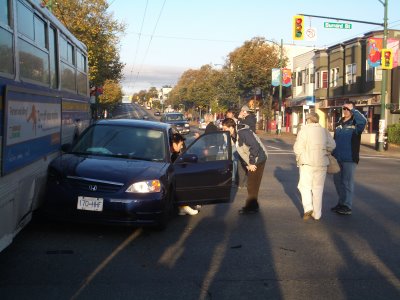 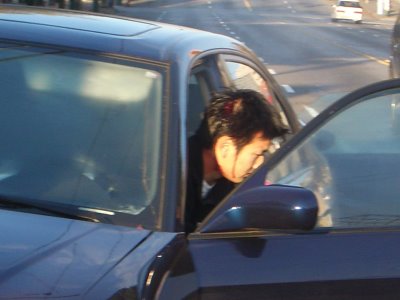 Despite the delay, since I had taken an earlier bus than I needed to, just in case there were any troubles with the bus, I managed to arrive in plenty of time for the Run for the Cure! First of all, I want to thank everyone who sponsored me in this run — it really meant a lot to me and the money is going to a very important cause! And thanks to everyone who sent me supportive good luck wishes and to Jason who came out to support me in person********, and to all my friends who also ran the run at various locations around the country. This was the first “race” I’ve been in since elementary school and I was surprised by how fun it was. I think I may be becoming addicted to running, as I’m now seriously contemplating a 10K and the idea of a half marathon now seems only slightly crazy to me. I finished the 5K in 27 minutes, which was faster than I thought I would be. After the run, it was a quick brekkie of Eggs Benny at the Templeton and then I had to run off to play ball hockey at UBC. Ball hockey involves a lot of running around and makes you tired even if you haven’t just run at 5K. Especially if you haven’t played ball hockey since last March! I’m pretty sure the sore back is ball hockey-related.

Then, as if that all weren’t exhausting enough (and as if I hadn’t already stayed up late on Saturday night), it was home for a shower, a load of laundry and then back to UBC for an Aggie trip to Roosters! Roosters, for the uninitiated, is a country bar in Pitt Meadows. Yes, you heard that correctly… a country bar. Now, I may never have mentioned this here before, but I dislike country music*********. But copious amounts of pre-drinking before we left (and on the bus on the way there**********) and the fact that Aggies are fun people made the country music palatable. Danceable even. They even played a few non-country songs and the band did a country-fied version of Blister in the Sun. Weirdness! There were some nice episodes of puking on oneself which left people in various states of undress (… I am pleased to report that I was *not* one of the pukers).
We got back to UBC around 2:30ish*********** and crashed on the couches in the Ag Sci building. It was rather strange waking up at 9 am in a room where there are a bunch of hung over people sleeping on couches and then a bunch of students studying at the tables. But you only live once, right?

OK, so I feel like that was a lot of yammering on my part, and like I should somehow wrap this extra long posting up with some poignant observation. But since I have no poignant observations to make, I offer you this: Kalev and I watched Anacondas tonight and I’m thinking that my new blog title could be “I love science, but I love money even more!” With writing like that, I don’t see how the Academy overlooked this movie.

**not to mention the pre-drinking before we left.

***Fortunately, he turned out to be a super nice person, so I was happy to be celebrating his success.

*****In fact, I believe my exact words were, “I’d sleep with him even if he didn’t get a single point all season!”

******They had given Luongo the night off and Flaherty a chance to play.

*******It seemed like a bit of overkill, since the only one who was even remotely injured was the driver of the car who ran the light.

********and who missed actually seeing me cross the finish line and so doesn’t believe I actually ran the race.

***********At least, I think that’s what time it was. My time telling skills may have been lacking, given my state of inebriation.