1. I’ve found a new love. His name is Taylor Pyatt and I’ve got his number*. He scored last night and I predict he will be scoring a lot in the future. He looks a little goofy in the photo on the Canucks website, but this is what he really looks like: 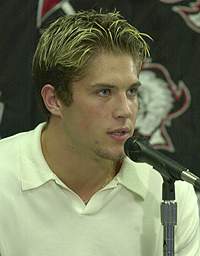 2. I saw a real live cougar at the gym today. Prowling around amongst free weights, stalking the the muscle-bound boys like a lion stalks gazelle through the African savanna. Leathery skin. Leopard print spandex shorts**. Hoop earrings and 4 or 5 necklaces. Who the hell wears jewellery to workout? Cougars, that’s who.

3. Speaking of the gym… I know that Lucas, the “fitness specialist” who oriented me to the gym, is only being so friendly because he’s trying to get me to sign up for a real membership once my free 2-week membership is over, but it doesn’t stop me from liking how friendly and chatty he is with me. It’s not like I can’t see through the fact that they have the cute boys orient the new female gym patrons (and, I’m sure, they have the cute girls orient the new male gym patrons***)… in fact, I predicted that he would be totally cute even before I went. But I still like it.

3. I spent the evening sorting through photos, newspaper clippings, concert & movie tickets, and various other paraphernalia that needs to be put into scrapbooks. I haven’t put a single thing in a scrapbook for over 6 years, so you can imagine the piles of papers that I have sitting around my living room floor right now****. I’ve even had to email people to figure out when some of the photos were taken*****.

4. I have noted, from going through these six-plus years worth of photos, that I have an inordinate number of photos of people at the Naam.

6. I’m going to a Halloween beer garden, but I don’t know what I should dress up as. Any ideas for a costume for me?

7. I bought this coffee, which was on sale at Stong’s. It’s a fair-trade, organic coffee from Bolivia called Café La Paz and it is wicked awesome good.

8. If you worked at Aeroplan and you received a letter, with supporting documentation, from someone who wanted their name changed and wanted “Dr.” to appear on their Aeroplan card, but they didn’t even remember to put their Aeroplan account number in the letter, would you think they were an airhead?

9. I haven’t been to a wedding since Sarah & Dave got married back in 2004, but I’m invited to two weddings next year******. And for a little while I was worried they would both be on the same weekend, but they are, in fact, on back-to-back weekends. Which will be perfect if I have actually gotten a job and moved away by then, as I will be able to make one trip to Vancouver for both weddings.

10. Is it wrong for a nutritional scientist to be eating toaster waffles at 1 in the morning? They have flax seeds in them, so that should count for something, right?

*His number is 9. Which is the same number as I have on my ball hockey jersey.

**I’m not making this up. She honest-to-goodness was wearing freakin’ leopard print spandex shorts!

***Which, of course, is rather heterocentric of them.

***Which, I am sure, is in no way annoying to my roommate or her best friend who is visiting this week. Yes, that’s right, there are three girls staying in a one bedroom apartment. Most surprisingly, it totally works for us. Thank goodness that we are all very, very easy going.

****I’m sure my friends won’t find it strange at all to receive emails that say “hey Tom, when the hell were you here?” and “hey Kaede, what year did you spend Christmas with me?”

******Shalu & Deepak and Erika & Paul. Yay for cool people who are getting married to cool people!