Since late August, I have won tickets to see sneak previews of three different movies (Crank*, The Queen** and The Last King of Scotland***) and a play (Life After God). Why can’t I have that kind of good luck when it comes to looking for a job??

I think we can all agree that after last weekend, I need to detox. So my roommate and I are doing a detox diet. My roommate is doing the whole herbal thing, whereas I am just following the diet. For the most part, it’s not that different from how we usually eat****, but dammit, I really miss my diet Pepsi. And for some reason, poutine isn’t included on the detox diet. We started our detox on Monday, so on Sunday we decided to eat all kinds of foods that we wouldn’t be allowed to have for the next 12 days… like peanut butter and honey, and candy and chips and cherry vanilla diet Dr. Pepper: 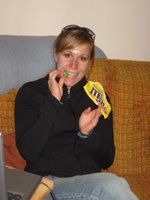 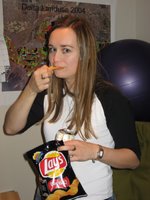 … and friggin’ good cheesecake with mango puree***** from Nyala: 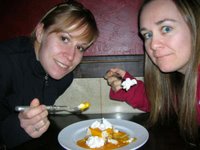 Fortunately, I’m allowed to have up to 2 cups of coffee per day and all the green tea I can drink. And we’ve discovered a wicked good chai green tea, so between that and water with lemon in it, I’m surviving. And I’m addicted to potatoes cooked with garlic and onions. And rice cakes with almond butter, which are quite yummy. And which I have taken to smuggling into the free movies.

I’ll keep you apprised of my detox progress.. and will no doubt be writing next Saturday with a giant glass of diet Pepsi.

*I think the premise behind Crank is the perfect premise for an action movie – the main character has to keep his adrenalin up or he’ll die… a recipe for non-stop action!

**Despite the fact that everyone else I know who has seen it liked it, I thought The Queen was really boring. I mean, the whole movie was “when will the Queen speak publically about Diana’s death?” And we already know that she waited a week! Boooooring!

***This movie was phenomenal! My roommate had been telling me about it and how she really wanted to see it and that same day I got an email saying I’d won tickets!

****We are both vegetarians; she’s a dietitian in training and I’m a nutritional scientist, so needless to say that whole grains and fruits and veggies are already staples in our house.

*****We were actually waaaaaay happier to be eating this cheesecake than the picture would lead you to believe. But this was like our 5th try to get the photo, with previous attempts missing the cheesecake or cutting one of us off, since we were taking the photo ourselves. And by that point, we just wanted to eat the cheesecake already!!