Apparently it’s party season*. I have four outstanding party invites outstanding at the moment**. This Saturday I have a holiday potluck for the lab in which I used to be an unofficial member/official hanger-on. My mom gave me a holiday recipe magazine when she was here that has some fantastic recipes that will be sure to wow everyone… if only I could figure out where I put the magazine. Also on Saturday is a party to celebrate a friend’s passing of his PhD qualifying exam. Kalev is going to bring his shot syringe that he won when we went to a free screening of Turistas… I’m very excited about that. I mean, who wouldn’t want to inject 1, 2 or 3 shots directly down their throats?? The last time I went to a student-run party after a lab party was the day of the Hockey Jersey party***… so between that precedent and the shot syringe, I think it will be quite the par-tay.

December 16th marks the anniversary of Erika’s birth (correction: E’s b-day is actually Dec. 15th) and the date of her”12 Bars of Christmas” pub crawl. That is expected to be just as wicked as it sounds. Two days after that**** I have another potluck, to which I was instructed that I am to bring a cheesecake. Specifically, a cheesecake like this one: 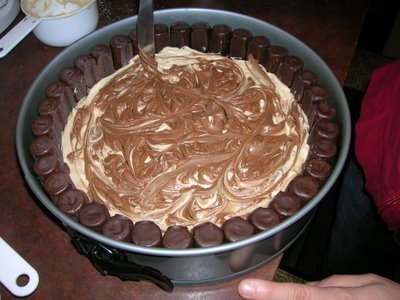 There’s also a New Year’s party, the details of which I don’t yet have. And I wouldn’t be surprised if a few more festivities arise in the coming days as well.

*If you don’t believe me, check out these pics.

**Yes, that sentence does so make sense.

***most of which I don’t remember.

****which should be just enough time to have recovered.