In my old apartment, I had built in gas fireplace with a spot above the mantle that was originally meant to hold those old boxy cathode ray tube TVs, but which made a very good place for a frog tank. 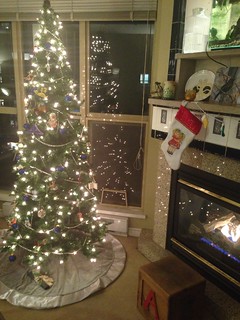 My new place doesn’t have the built in gas fireplace, so when I moved in, I was faced with the question of where to put the frogs. I needed a piece of furniture that was strong enough to hold the tank, that had room for the two electrical cords required (one for the filter and one for the heater) and, ideally, that looked nice too. When I first moved in, I put them on top of a small bookcase that I had1, which seemed fairly sturdy, but I wasn’t 100% sure it would be able to sustain the weight over the long-term.

One of my friends suggested that I should get a stone pillar – like the kind you might see in a garden, but I looked at a few places and couldn’t find one. And then I got the brilliant idea that perhaps I should actually look a a built-for-purpose aquarium stand. I looked around online and found a few things that would be serviceable, but I decided I should check out the store where I usually go for my frog needs, Aquariums West2. I needed some new filter pads for the frog tank anyway, so I headed downtown yesterday to the store to pick those up and check out my frog tank-supporting options.

They had some tall black plinths which were very nice, but cost nearly $200 and of all the things that I want to spend $200 on, plinths are not high up on my list. But, as luck would have it, they had a couple of small aquarium stands that were end of the line, so they’d built them up and were selling them at a deep discount. Which meant that I got an aquarium stand for cheap AND I didn’t have to put it together3!

And so I bought the stand and put it in a different corner of the living room than I’d had the tank in on the bookshelf – I’d put the bookshelf in was a corner between my two giant living room windows and so the tank was getting too much sunshine, causing the algae to grow like crazy. I’m hoping that having the tank not in direct sunlight will prevent that from occurring again! 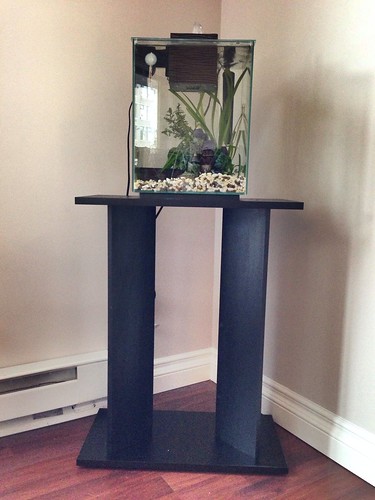