Here is a quick summary of my blog and Twitter stats for 2014, in delightful Google spreadsheet form:

My blogging and tweeting stats are continuing their downward trend, which is not at all surprising, given that my blogging was very inconsistent this year. Case in point, I only blogged twice in the entire month of November – and I didn’t even remember that November is National Blog Posting Month (NaBloPoMo) – the month when I usually blog every day- until the past few days when I was writing up my year in blog postings! Ah well, apparently I was having too much fun this year to spend my time blogging! And it’s quality over quantity, right?

Also, if you are interested, you can also check out my blogging annual report from WordPress.

Is it wrong that I’ve been excited about making my 2015 goals list since about mid-November? I’m not sure why I’m such a goal fanatic but the idea of setting goals and working towards them makes me unnaturally happy. Anyway, I now present to you my 2015 goals, some of which are old familiars by this point (either from my previous years’ goals lists and/or taken from my 101 list), but also a few new ideas to keep things interesting.

Reviewing My Goals for 2014

Since it’s the end of the year, which means it’s time to check in on how I did with my 2014 goals!

And now I’m sure you know what’s coming next… 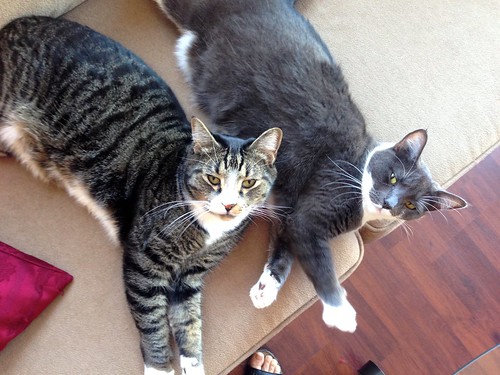 As I’m doing a bunch of year-end type postings, I figured I’d do the “twelve months” one where you post the first line of the first blog posting of each month of the year (and the name of the month is a link to the full posting). But I like to post the first *two* lines of every posting, because it’s my blog and I’ll post the first two lines if I want to.

As you know, I love setting goals. And what better time than New Year’s Day to do some goal setting!

A rotating crew of Canadians sharing their lives in with Canada and the world.

So, I totally thought that I’d written a blog posting about this before, but apparently not. Sometimes I compose blog postings in my brain when I’m not in a position to write stuff down and then forget that I never actually wrote them down

Hey, remember that time I played hockey for 10 days to raise money for Cystic Fibrosis? Well, yesterday when I picked up a copy of the Royal City Record (my local paper), I saw a familiar face from that game: Bill Markvoort.

Last Wednesday, I attended my fourth – and final – university convocation as a graduate1, receiving my hard earned MBA2. It’s hard to believe that just 28 months ago3, me and 50 other brave souls embarked on the intense and life changing journey that is the part-time MBA program at UBC.

Hey, remember that time I bought a condo? That was pretty awesome and also stressful but mostly awesome.

Apparently I’m really into theatre all of the sudden, as last night I saw Red Rock Diner at the Arts Club Granville Island Stage.

Last week was a bittersweet one1. Sweet, because I started my awesome new job.

So here I find myself on a plane heading to Toronto and I realize that I haven’t even mentioned a thing about my trip here on ye old blog! But now I’ve got 4+ hours on a plane and, sure, I have work I could be doing, but my brain is pretty fried from all the work I’ve been doing of late, so I figure I’ll write this blog posting now and leave the work for later, as there will be plenty more flights and sitting around in airports in the next week!

My going away present from my coworkers at my old job was two tickets for a tour of three breweries – obviously, my former coworkers know me very well! The tour company,Vancouver Brewery Tours1 picks you up at Waterfront Station, takes you around to tour three different breweries – going behind the scenes to see all the cool equipment and learning about all the cool techniques of how they brew their beer – and then drops you back at Waterfront, so you can enjoy all the beery goodness – a flight at each brewery – in a responsible fashion.

A Few of My Favourite Tweets, 2014 edition

It’s been a year since I last shared my favourite tweets here on ye ole blog, so I took some screen shots for you. It seems that more of my fav tweets were related to politics than in the past, which makes sense given that 2014 was a municipal election year, but there’s still quite a few funny ones in there. (These are in reverse chronological order, because Twitter). Enjoy! 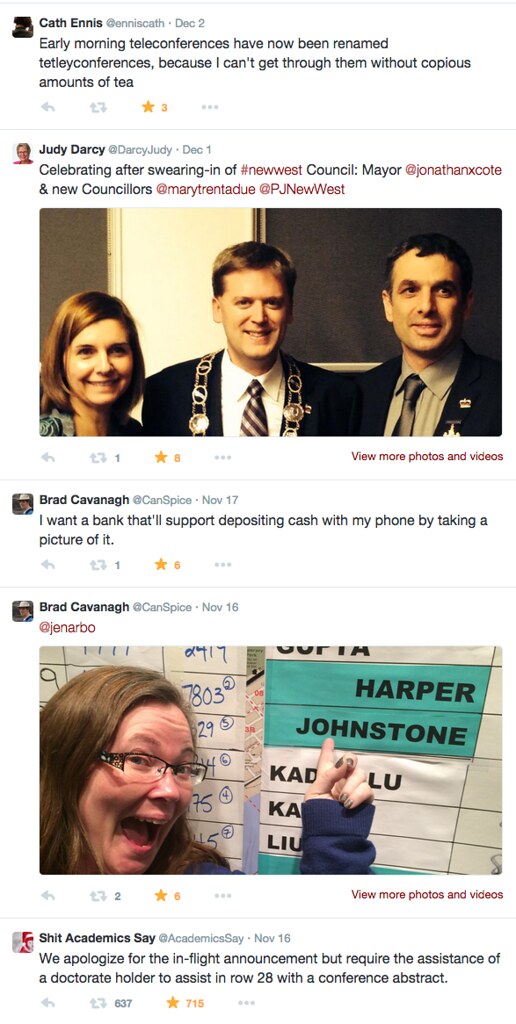 This reply by my friend Cath to the Prime Minister really made me laugh: 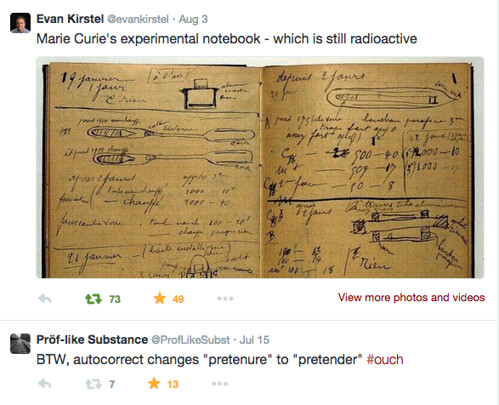 Marcy’s dress reminds me that I could always be crazy cat lady-er. 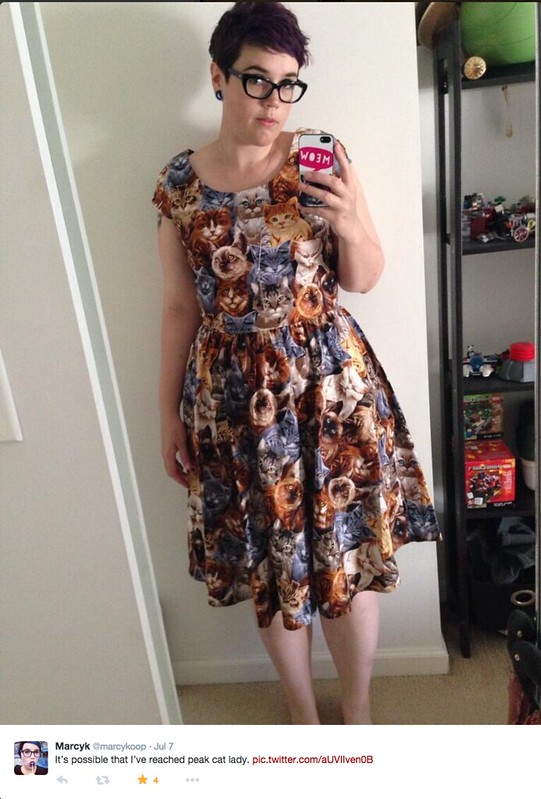 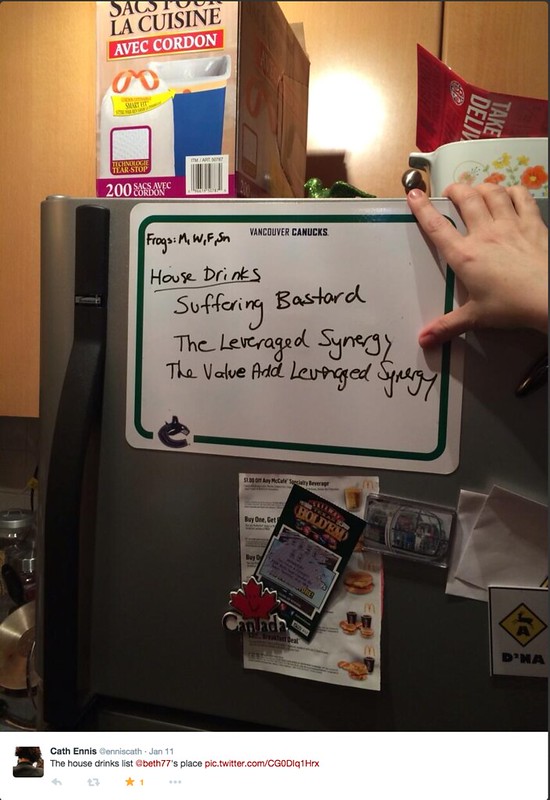 Yes, those are McDonald’s coupons on my fridge. I have a weakness for Egg McMuffins. 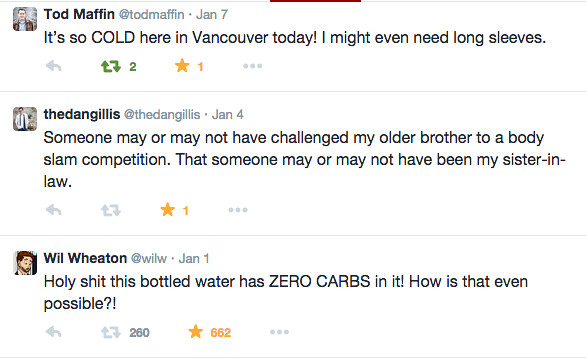 Making this year’s list of books that I read was much easier than last year, since I started using GoodReads to track my reading1

Non-fiction books I finished in 2014:

So I read 14 books this year with 5 more in progress – the exact same numbers as I had last year 11 – which surprises me, since I was still in school in 2013 and I figured that in 2014, with both not being in school and the addition of my Skytrain commute to work, during which I do a lot of reading, that I’d have read a lot more books this year. Perhaps I’ll make one of my 2015 goals to read even more books!

Merry Christmas To All!

Merry Christmas from all of us at Chez Beth – feline, amphibian, and homo sapiens! 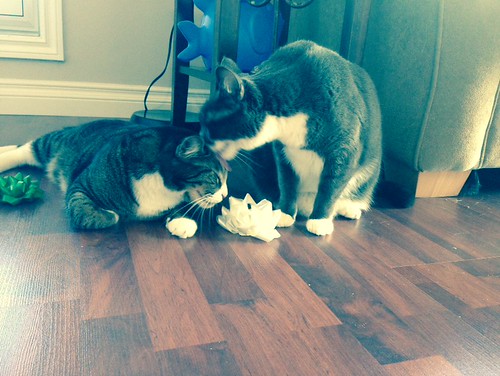 This was the closest I could get to a picture of the cats with bows on them. 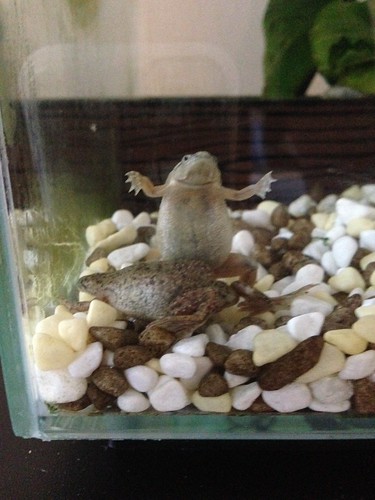 Likewise, the frogs were not keen to have a bow on them. But they wish you all a “Merry Christmas” nonetheless!

Another item from my goals for 2014 list that I figured deserved its own posting was make 14 new food items that I’ve never made before1. And this goal I not only achieved, but I actually surpassed!

This year, I made: 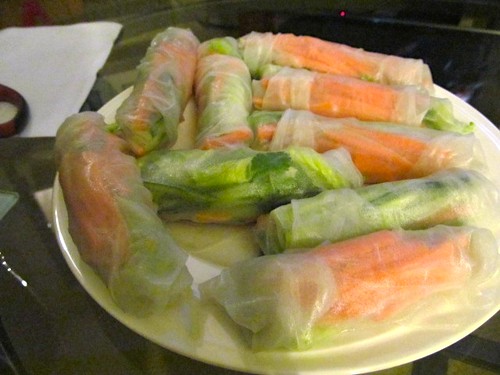 Salad rolls that I made with my friend Kim 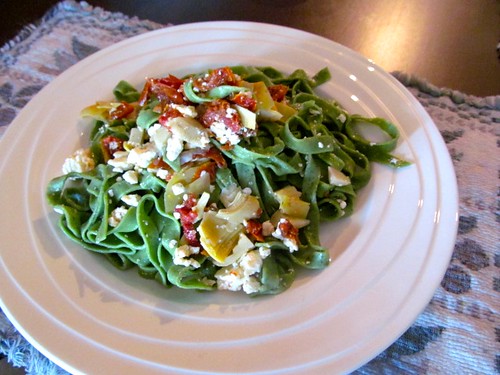 Homemade pasta that I made with my friend Linda. Topped with pesto and feta! 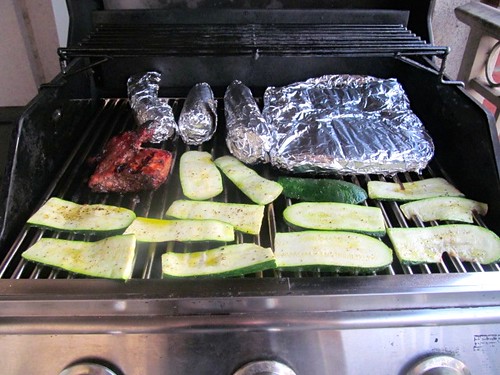 I also made guacamole devilled eggs a couple of times this year and I think the first time I made them was in 2014, but I’m not 100% sure I didn’t make them the previous year, so I’m not going to count them just in case. As well, I made *5* new drinks that I’d never made before – The Suffering Bastard, The Leveraged Synergy, and the Value Added Leveraged Synergy (all at my “I’m finished my MBA” party!) and the Mortgage Margarita and strawberry lemonade (for my housewarming party) – but I’m not counting those since the goal stated “food items”, but not beverages. But I don’t need to since, as you can see from the list, I actually made *19* food items this year! Hopefully I won’t regret using up extra new ideas this year when it comes time to try to come up with 15 new food and/or drink items to make in 2015!

Seeing as the end of the year is fast approaching, I’m starting to work on my typical year-end blog postings. And in doing so, I’m looking at my goals for 2014, which I haven’t looked at in quite a while, to see how well (or how poorly!) I’ve done on those goals. While there will be an upcoming positing summarizing all the goals, I thought I’d first do a preliminary one where I look at how many items I’ve knocked off my lists of 101 things to do in 1001 days, compared to my goal of 28. I say “lists”, plural, as my second 1001 day list ended on July 8, 2014 and my third one started on July 12, 2014, so I completed some goals from each of those two lists this calendar year. So let’s see how I’ve done, shall we?

13. Install screen doors on my balcony doors
16. Get a jewelry armoire
18. Get a strong structure on which to place my frog tank
20. Clean my new BBQ
23. Replace my mishmash of old dishes with a nice set of dishes
26. Unpack everything from my recent move
29. Get a rack and pannier for my bike
32. See a show at Bard on the Beach
44. Go to Chicago
57. Participate in a political campaign
78. Get a promotion or a new job
80. Have a picnic
83. Make a Christmas wreath to hang on my door

So that’s 16 items total – far shy of the 28 I’d hoped for1. A quick perusal of the list shows me a few that I could probably complete by 11:59 pm on Dec 31 if I tried, but not 12! Oh well, at least I did manage to accomplish a bunch – and I’ve made progress on some of the other items on the list as well, so I’m reasonably content. But I have to think seriously about what I’ll set as my number of items to complete as a 2015 goal…