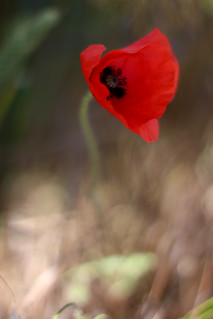 The last Canadian veteran who served in WWI was John Babcock, who died on February 18, 2010 at the age of 109 years old (Source).

My great grandpa Snow served in WWI. I know two things about his time in the war from stories that my grandpa told me. First, he was at Vimy Ridge, the battle where the Canadians took over a strategic piece of high ground that was being held by the Germans and was the first time that all four Canadian divisions fought together. Second is this story that my grandpa told me: One day my great grandpa was in a trench, talking to his buddy. He noticed his boot was untied, so he bent down to tie it up. When he stood back up, he saw that his buddy had taken a bullet right between the eyes. If not for an untied shoelace, there’s a very good chance that my great grandpa would also have been shot and I would never have been born. Of course, when you think about it, there are millions and millions of people who were never born because the people who would have been their progenitors were killed in war.

My paternal grandfather was not allowed to serve in WWII, because he was blind in one eye (though he tried to enlist). My maternal grandfather did serve, but I actually know nothing of his time in the war. I should ask my mom about this, to see if she has any stories.