Blast From The Past

Well, for better or for worse, my thesis is in the hands of my committee! I think I am single-handedly keeping Copyright afloat by repeatedly printing this behemoth… but at least it’s a student-run business, so the money isn’t going into the hands of a greedy corporation*.

So, after making the trek to all the far-flung corners of campus to distribute my baby to my committee members, I celebrated by NOT being on my computer all day! I went to the public library and got a pile of books to read for fun! I went and got fresh produce and made a REAL meal (not a microwave burrito, nor take-out) for the first time since I moved into my new place! I unpacked all of the boxes I wanted to and have stored the boxes I want to leave packed in various nooks and crannies. My apartment now looks like an apartment and not a storage room! Yay!

Also, in the move, I discovered some cool things I’d forgotten that I had. Like this cute little sunhat that I bought a few summers ago in London, ON**. And some really cute baking things***. And a sterling silver cup from when I was a baby! And some Pendelfin figurines. And, most importantly, I found these photos: 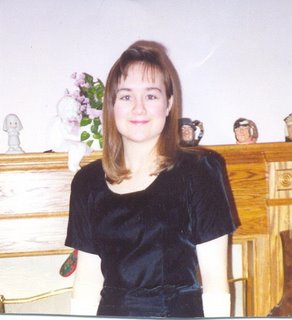 This is me, circa early 90’s. I believe this may have been pre-Snowflake Ball, the annual winter semi-formal dance at my high school. Seeing this reminded me of last year’s “First Annual Mega-Mall-Hair Off” between Kris and Jurgen. Not that I would dare compare myself with those two preeminent virtuosoes of ’90s hairdom – I pale in comparison. But I do find my bangs a bit humorous.

In grade 12, we did a production of 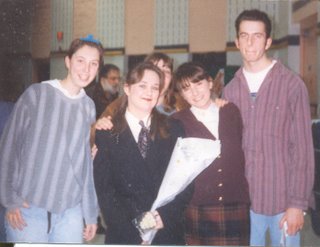 The Mousetrap. Sarah, who inexplicably is the same height
as me in this pic (Sar, did you really keep growing after grade 12?), starred as Mollie Ralston and I played Miss Casewell, described by the Literary Encyclopedia as “a mannish looking young woman” — which explains why I look so freakin’ terrible in this photo — apparently our make-up artists were superb.*** 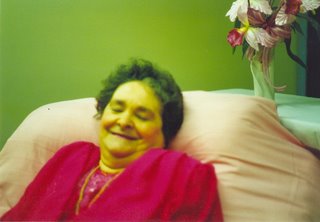 In high school, I used to volunteer in the chronic care ward at the local hospital. Every Thursday after school I would spend the afternoon visiting with the patients, helping them make phone calls, feeding them dinner and just helping out in whatever way was needed. Since this was the chronic ward, it meant that the patients there were never getting out – they were going to spend the rest of their days there. This was one of my patients who was always a joy to see on my weekly visits – her name was Mrs. Godley and she was really a lovely woman. I believe I received this photo one Christmas and I can’t believe that I had forgotten that I had it. 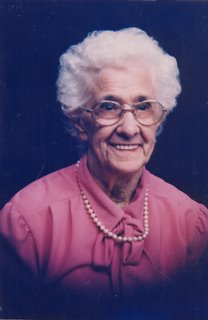 This is my Great Granny, Sarah Snow. I remember visiting her in Montreal as a kid — she had this player piano and my sister and I would be endlessly entertained when she would pump the pedals to make the piano play on its own… it was like magic to us. When I was in high school, she fell and broke her hip and died shortly after, at the age of 98. I was in Kingston with Sarah at the time — I have a silver locket that she gave me as a kid, which I was wearing and the chain of which broke the same day she died. When my family went to the funeral home, I remember walking into the building and thinking it sounded like a party was going on, rather than a viewing… everyone was laughing and telling stories of all the funny things Great Granny used to do and say. It was truly a celebration her life. That was the first funeral I ever went to. 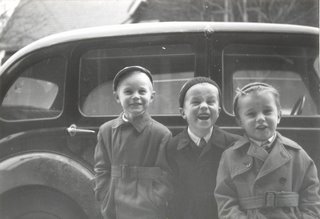 This is a picture of my dad and my uncles Bob and Greg from when they were little. I don’t know who is who in the photo. My uncle Bob died at the age of 21 in a boating accident on the Lachine Rapids. My grandfather is an avid hunter and used to take my dad and uncles hunting. Uncle Bob once said that if he died before his brothers, he wanted to be reincarnated as a duck and that, while hunting, they would try to shoot him, they’d be sure they had the duck in their sights, but they’d miss and he’d laugh at them. My dad swears that this happened exactly as Uncle Bob described after Bob died… he had a duck in his sights, shot and somehow the duck didn’t get hit, and then the duck started to quack and it sounded just like laughing.

This is my Grandpa and Grandma Griffin. Grandma died of cancer when 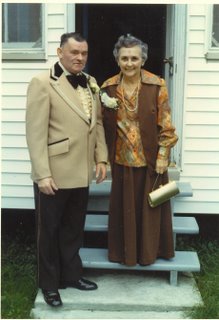 I was 3, Grampa died of a heart attack when I was 5. I don’t remember my Grandma, but my sister remembers my aunts sneaking us under a fence so that we could sit outside the window of Grandma’s ICU room so we could wave at her (kids weren’t allowed in the ICU). I do remember my Grandpa – he had this little plastic tea set for us to play with when we visited; we used to take it to the park and play with it in the sandbox. He also gave us the foam off the top of his beer and told us it was ice cream. I remember my sister and I being very upset that we weren’t allowed to go to Grampa’s funeral. Our babysitters that day took us to the park and to the penny candy store to try to distract us, but we still remembered that everyone was at Grampa’s funeral, even despite getting those chocolate cigarettes. When my Grandpa died, everyone in the family got a framed copy of this photo and whenever I think of my grandparents, this is how I picture them. My sister and I were the only grandchildren that my grandparents lived to see (they have 9 grandkids now).

*which will be small consolation when I go bankrupt from all the money I’ve spent on printing these past few months.

****At least that’s what I’m telling myself, as I refuse to believe that I really, truly looked this awful!