… I believe that is the result of the new math.

So, now that I’m recovered from the par-tay, I can give you a brief recap of the festivities. But first I’d like to say that more people wished me a “Happy 1/2 Birthday” than wished me a happy real birthday. This may have been because I was pretty much hiding away from the world on my actual birthday, as opposed to blogging about/emailing about/talking about/changing-my-msn-messenger-tagline-in-reference-to like I did with my 1/2 birthday… but I could be wrong on that.

The evening started with dinner for 16* at the Rugby Club who, despite their best efforts to screw up my reservation**, did actually manage to give us our table. Food was delish, drinks*** were cheap. Service… not so much. But they brought me a free piece of chocolate cake with a candle when my friends told them it was my birthday! Unfortunately, I didn’t get my wish****… perhaps wishes don’t work for 1/2 birthdays?

After dinner, the old folks***** went home and the hip, young kids went to the Buffalo Club. The highlight of the journey was Deepak’s first bus ride since bus rides cost 75 cents. We were able to waltz right in ahead of all the people in the lineup because, due to my connections******, I had got us on the guest list. Since the dinner reservation had to be at 6:30 (apparently they didn’t have anything later than that), we ended up at the club quite early. After partaking of some Jäger Bombs******* and other bevvies, we noticed that the crowd in there seemed very, very young. Even too young for me (and you know my feelings on young-ness, so that’s saying something). Erika’s bf decided that he looked like “someone’s dad” and contemplated storming up to the first young couple he saw and demanding “What are you doing with my daughter?!!”… apparently, we needed to feed him more drinks, because he never did it (but I would have paid good money to see that!). By the same token, I did not dance in the cage, despite my claims that “one more drink and I’ll do that”. At around midnight, all the kids in the club inexplicably aged about 7 years and we felt much less out of place (although perhaps we were just more drunk).

As the night wore on, various people came and went********, and when the group had been pared down to 5, Nadia & her boyfriend Phil suggested we check out the Tokyo Lounge. Now, Phil is a man with connections. Not only did he get us right into T.L., but somehow he had a parking spot directly in front of the Buffalo Club and drove us over to T.L., directly outside of which he found a parking spot. I’m not sure how that is possible, but it happened. Once inside, he talked to the bartender and got us King Kong shooters and then any other drinks we wanted. And then I did something I haven’t done before. I turned down free alcohol!********* Perhaps it’s just the maturity that comes with being closer to 30 than I am to 29**********, but I thought “perhaps I have had a sufficient quantity of ethanol tonight.” I also remember thinking, “I would like to get through my 1/2 birthday without puking at any point.” Overall, I think this was a good move.

Also, there was something that was going on that was really, really funny, but I which will refrain from actually saying what it was here in the blogosphere, in order to protect the innocent***********.

Oh yes, on the A.R.M. research front — again, no A.R.M. In fact, it has been so long since I have had a case of A.R.M. that I’m beginning to question my experimental model…. odd. Seems like more research is needed.

Now, I’d love to show you some photos from the evening, but I don’t have any. This is due to (a) my lack of a digital camera, (b) everyone forgetting to bring their digital cameras, and (c) Alicia’s inability to work her souped up camera phone************. So instead, I show you photos from previous outings for which I never bothered to post the photos before. 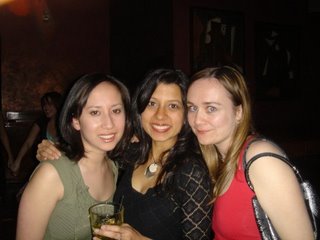 This is a picture from Shalu’s birthday at Au Bar. I wanted to link to my melodious description of that night, but I discovered that I never blogged about it. D’oh! 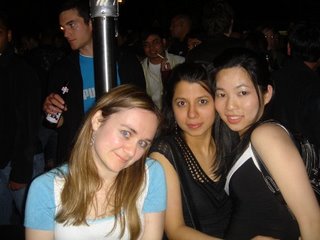 certainly did blog about). A few things of note about this picture. (a) We look remarkably sober in this picture, which we are, in fact, not; (b) that’s the same shirt that I wore to my 1/2 birthday party, so this pic is a reasonable facsimile for this blog posting; and (c) notice the hottie in the background? Somehow, inexplicably, that night, we didn’t. D’oh!!

Once upon a time an intrepid young blogger commented “We finished off the night at Au Bar where people who were not me danced up on the risers.”

Now, I can exclusively provide you with evidence that this is true.

***I highly recommend the Chesterfield Rugby, a modified bellini, of which I had the same number as there are asterisks at the start of this sentence. BTW, Shalu, thanks for buying me #3! And for the bottle of Fireball!

leave it up to your imagination what my wish was. 😉

******And by “connections,” I mean my internet connection. Seriously, you just have to fill in the online form.

*********I can just picture the look of disbelief on Sarah & Dave‘s faces right now — apparently, I am not a patriot.