The Heathen’s Guide to World Religions 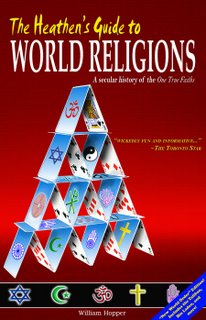 I’ve been looking for a copy of The Heathen’s Guide to World Religions ever since I lost the custody battle for the copy I used to sort of own*. Chapter’s, the liars, have been claiming that this book is “temporarily unavailable to order” since the beginning of time. I’ve searched used bookstores all across Vancouver. I’ve searched online bookstores. I even googled the author, William Hopper, and the publishing company, Diogenes Press, in hopes of contacting them to see if they have a few copies of this book lying around that I could purchase. All to no avail. Until now.

Somehow, out of the blue, Anonymous posted a comment on a recent posting of mine (which had nothing to do with The Heathen’s Guide to World Religions whatsoever) that merely said, “http://www.heathensguide.com/” And lo and behold, you can buy the book there! I highly, *highly* recommend this book to anyone interested in the history of the major religions**. How can you not like a book that is dedicated to “Mother Teresa, who had me forcibly removed after I was introduced to her; and some guy who punched me in the face for Jesus“?

And, as an added bonus, the author has a blog too. Which he appears to have started on September 4, 2006. I love the irreverent way this guy writes and I’m definitely adding this one to my blog roll. I’m telling you, get in on the ground floor on this blog everyone!

*OK, so there wasn’t *actually* a battle. A skirmish. With light sabres. But not really a “battle” per se.

**This is a new and expanded version, compared to the version I used to sort of own. And I’ve very excited to see what’s been added.

***Anonymous – you should totally come out and tell us who you are and take credit for your find! Or am I the only attention whore on this blog?

2 Responses to The Heathen’s Guide to World Religions