The Tale of the “Vegetarian” Marshmallow

Today I received a most exciting email:

We are pleased to report that a product in the VeganEssentials Online Store, about which you requested notification, is now in stock. 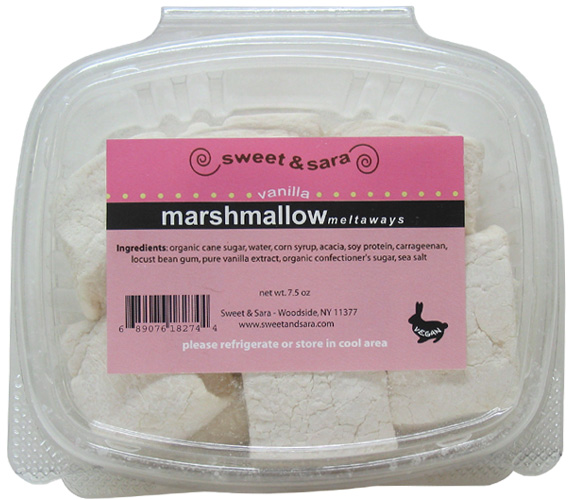 About two years ago I decided that I really needed to find me some vegetarian marshmallows1. I’ve been a vegetarian for over a decade and while I’m perfectly happy not eating meat, I really do miss marshmallows3. I can have marshmallow creme, as that is usually vegetarian, but you can’t toast a jar of marshmallow creme! At that time, I found a brand called “Vegan Supreme Marshmallows.” They were stupid expensive – if memory serves me, they cost something like US$8, plus shipping, for a bag containing 18 marshmallows. But it was oh so worth it to toast marshmallows on my stove again!

I was so excited, in fact, about the discovery of this product that I emailed both Choices & Capers, two local fru-fru organic grocery stores and told them that if they carried these ‘mallows, I knew many, many vegetarians who would be more than happy to buy them. Choices ignored me, but Capers actually started carrying them, which meant I could just pay $8 a bag, no shipping. At that point, my life was basically complete5. Until one day, when I went into Capers and lo and behold, no Vegan Supremes! I asked one of the staff what was up with that and he said that “one of their ingredient suppliers went out of business so they can’t make their marshmallows anymore.” I’m not sure why, but I assumed that it was the maker of their vegan sugar6. I was totally disappointed, but I figured that in the long run it might be a good thing for my chequebook and my waistline to not have such ready access to these tasty treats.

Skip forward a few months and, in a fit of procrastination no doubt, I decided to see if that company had ever found new suppliers. Googling “Vegan Supreme Marshmallows” yielded this: as it turns out, the company that he been supplying the vegetarian gelatin substitute to the company that made V.S.M. was just lying – they were just selling regular old animal bone & skin-derived gelatin! Which means that I had been eating gelatin! And, to add insult to injury, I was paying $8 a bag to do so! So gross!!!

Anyway, after a recent conversation I had about marshmallows in which I recounted this tale8, I got thinking about marshmallows again and Googled and found that Sweet & Sara was now making vegetarian marshmallows, but the dealer, the VeganEssentials Online Store, was out of stock! I was thinking that perhaps they had met a similar fate, but signed up for a notification in case they ever had them again… and apparently they do! And just now I found the following on YouTube which explains all:

Part 1 of the video:

Part 2 of the video:

So, mystery solved. Sweet & Sara marshmallows really are veggie and my life is, once again, complete. Or it will be in 6-9 days9.

1Almost all marshmallows are made with gelatin2, and thus not vegetarian.
2Gelatin is made from animal bones/skin/hooves. Yum!
3And Mini Wheats, which also contain gelatin. My kingdom for a gelatin free Mini Wheat!!
4And this was back when the US dollar was worth more than the Canadian dollar.
5I know I’ve said that about my Treo, my eBay shoes and various other purchases, but really, it was the vegetarian marshmallows that completed my life. No, really.
6Refined sugar is often processed through bone char7
7Yup, “bone char” is exactly what it sounds like it is – charcoal made from bones.
8I really only have about 5 stories that I tell (e.g, the veggie marshmallow story, the story about how my sister screwed me out of tonnes of money when we delivered newspapers when we were little, this time I bought these shoes on eBay). After that, I’m pretty much out of material.
9Estimated shipping time to Canada.