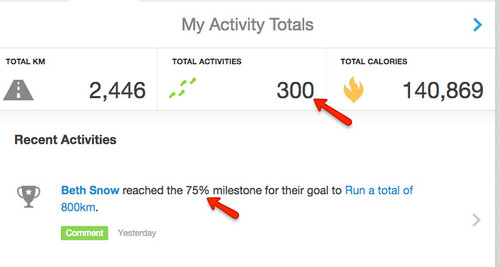 I also happened to hit the 75% mark on my goal of running 800 km this year. Unfortunately, we are 78% of the way through the year, so I’m still chasing that goal, but it’s within reach if I really try!

Of course, knowing there is only 2.5 months left in this year and seeing that I royally screwed up a couple of my 2014 goals has gotten me thinking about next year’s goals. I was inspired by Daniel completely smashing his goal for the Victoria full marathon yesterday (beating his PB6 by more than 30 mins!) and have to admit that though running a sub-2hr half marathon has been on my to-do list for the past few years, I’ve never really given it a solid try. I think if I actually do the full training program – including all the hill runs and the intervals and really push myself – I can make a solid attempt at breaking that elusive 2 hr goal. I’m also planning to do my first triathlon next year and so I’m thinking that I can attempt a sub-2hr half at the BMO Vancouver marathon in May, then jump into triathlon training for a late summer tri. And if I don’t reach my sub-2hr goal at BMO, there’s always Scotiabank in June or Victoria in October7.

But I really shouldn’t get ahead of myself. Right now I have my sights on a PB for the 10 km at the Oasis Rock & Roll in 2 weeks. That seems like a good short-term goal to focus on at the moment.

Hey, and speaking of goals, I scored one of those in my hockey game yesterday – my second of the season! Unlike my first goal – where the defenceman of the opposing team put the puck her own net but I was the last person on my team to touch the puck, so I get credited with the goal – I actually put the puck into the net myself! Of course, on this goal, the goalie had gone behind the net to get the puck, but my linemate got the puck instead and fed it to me as I was standing right in front of the net waiting for the pass with, inexplicably, no defencemen on me. So, essentially I scored an empty net goal, but hey, I was in the right place so I’ll take it!