Hey remember that most recent time I set a goal of running a sub-2 hour half marathon, specifically for this year’s BMO Vancouver, which will be my 12th half marathon? Since I’m really, really, really going to dedicate myself to my training and not flake out on it and tell myself that finishing the race is good enough1 this time, I went for my first training run (and my first run in *eight* weeks!) on my lunch break today. 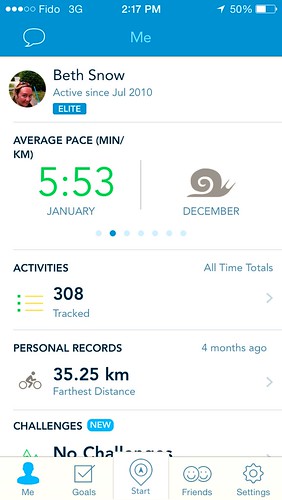 As usual, I’m following the training plan from the Running Room‘s book on running2 – except for the part where I’m actually going to follow the plan3. I’ve also signed up for a Sunday morning running clinic so that I have people to do my long runs with, which is through Fit First4. But I’m getting ahead of myself. Back to today’s training run.

As I mentioned, I hadn’t been out running in two months (!), so I was expecting be sucking wind on today’s run. Instead, I actually felt fine. And not only did I feel fine, but I ran a significantly faster pace than I usually do, though it didn’t feel like I was running faster. I think maybe there really is something to this whole “recovery” thing I keep hearing about.

Today’s run5 was slated to be a 3 km tempo run, targeted at 5:55 per km. Since I was running on my lunch, I decided to set up my Runkeeper app to have a 5 minute warmup, which is enough to get me away from the busy street on which I work and past the long streetlight on another major street, so that I could focus on running uninterrupted along the seawall, in the hopes that I could reach the target 5:55 pace. And as you can see from this handy dandy screen shot, I was practically on my target pace for the warm up, and then well within the pace for the necessary 3 km (outlined in red): 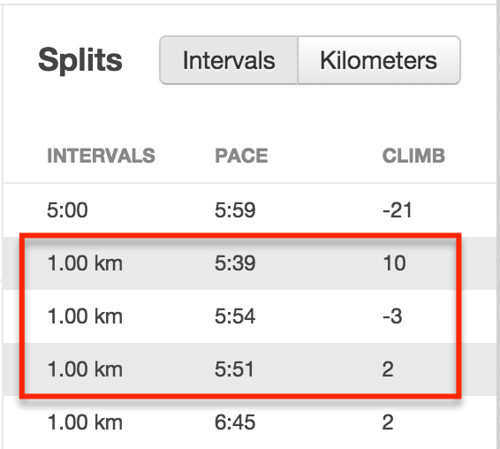 (The last “1 km” is really just a small fraction of a km and included me stopping at the aforementioned stoplight as I geared down for my cool down).

I have to say, I was pretty chuffed that I was able to achieve the target pace and that I didn’t feel like puking from it. Honestly, I was really surprised when my app told me what my pace was (as it was set up to tell me my pace every 1 km) and thought that there must have been a glitch where it thought I’d run further than I had, as I felt the same as I do when I run my usual ~6:30 per km pace! I think what we can learn from this is that my internal speedometer, like my internal compass and my gay-dar, is broken.

Now here’s hoping that this run is a harbinger for the rest of my training6!