Two years ago today, I picked up two little kitties, then named Simon & Blue but whom I immediately re-branded as Watson & Crick, from the foster home in which they had been living for the past five months, and brought them home. They eagerly jumped into my cat carriers as if they were just delighted that I was to be their new cat mom, but on the long car ride there were some sad little kitty cries that made me think “Omg, I hope they are going to be happy in my home!” They were very curious when they got to my place, checking out the entire apartment and then settling in quite nicely1. And in the last two years, they’ve just gotten more and more comfy in our2 home, and gotten more and more affectionate.

They have each established their own little rituals and favourite places. Crick loves to nap on my kitchen chairs when the chairs are pushed under the table3 and at night when I got to bed she comes with me to do a little kneading and then curls up either on my right side all cuddled up with me or on the pillow next to me. Watson likes to get his evening exercise by bursting, out of nowhere into a run down the hall and parkours off the front door, lands, and then just walks away like nothing happened. He likes to sleep at the foot of the bed, and that is in keeping with his general philosophy of wanting to be near you, but not necessarily touching you. This philosophy is a bit at odds with his desire to be petted, and this contradiction manifests itself with his tendency to sit on the floor just out of arm’s reach when I’m sitting on the couch, but then meowing and meowing until I pet him. He also enjoys watching me get ready for work in the morning, during which time he also meows until he gets petted. Both of the cats coming running to greet me at the door when I come home from work and they run into the kitchen when they hear me making tea and give me puppy dog eyes, because they know that I’ll give them treats4. The most exciting thing for them, however, is when there is a pigeon – or pigeons – on the neighbours balcony. 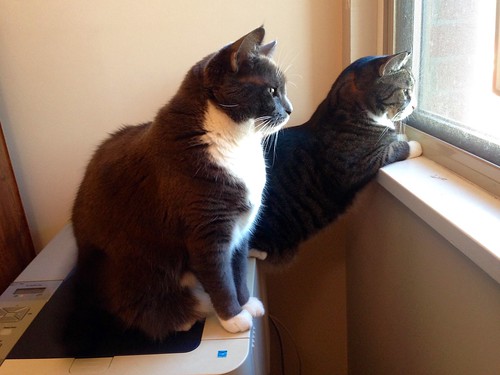 As I’ve mentioned before, Watson really like eating cucumber. After much trying5, I *finally* caught it on camera.

Also caught on camera was Crick opening a cupboard door:

In honour of today’s cativersary, I bought a giant cat tree, which the kitties absolutely love. In fact, as soon as I took the pieces out of the box to start assembling them, they climbed right into it! 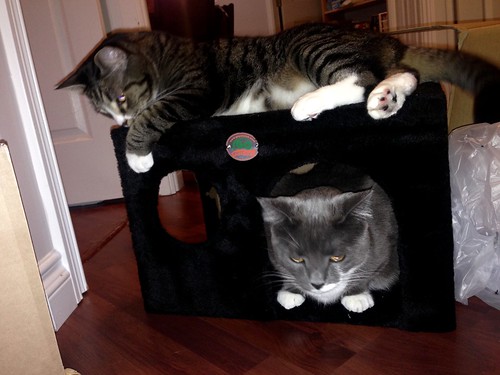 I assembled it, which was reasonably easy despite requiring a bit of moving of cats off of the next piece that I wanted to add to the structure. And then once it was all done, the kitties were able enjoy climbing around on its various levels and playing with the attached fluffy toy. 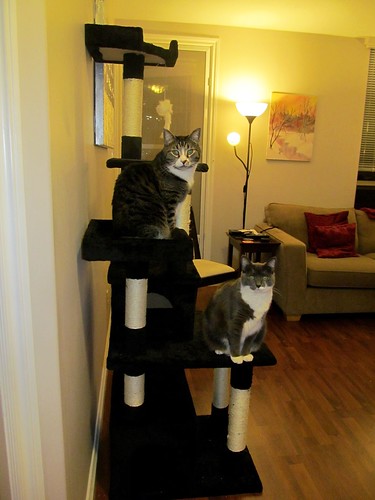 In conclusion, my cats are the softest, sweetest, funniest, bestest cats in the whole universe and I made an excellent choice when I bought their lives. 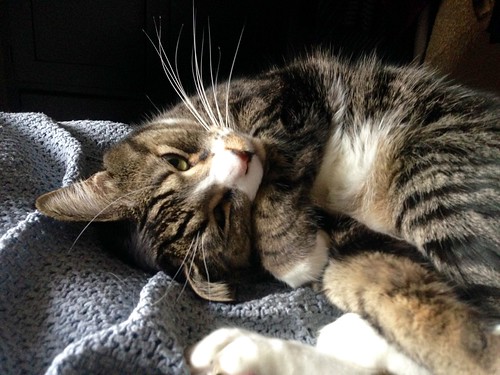 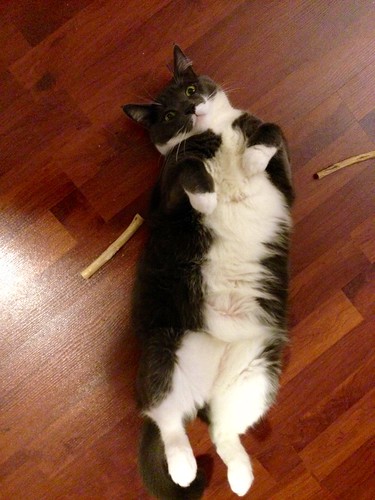 I love you, my crazy little muffins!