This sore throat really needs to go away 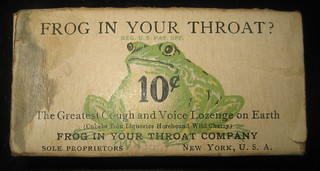 So I’ve had a sore throat for like a month and it’s really, really over stayed its welcome. It seemed to have developed right when I got back from the holidays, so I blame germy people on the airplane. When I said I was going to get back into my running routine, I was figuring that my sore throat would be gone soon, but it seemed to just keep sticking around, which meant that I decided not to go out running in the cold rainy weather we’ve been having for fear of making it worse. In the last about a week, it seemed like it really was gone, but yesterday it came back with a vengeance1. Or perhaps the old one is gone and this is a new sore throat. All I know is that I am not impressed!

I had briefly contemplated doing the UBC Triathlon in early March, which seemed like it was do-able if I started training in early January, but now it’s February 3 and I really don’t think less than a month is enough time to train for one’s first triathlon, and that would be assuming this sore throat goes away right now, which doesn’t seem likely.

Anyway, this is kind of a pointless blog posting2, but if a blog isn’t a place to put my pointless whining, then what is? Also, I really like that photo of the “Frog in Your Throat?” cough lozenge package.

Image Credit: Posted by Infrogmation of New Orleans on Flickr with a Creative Commons license.

One Response to This sore throat really needs to go away