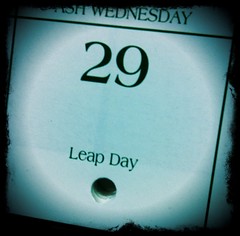 Today is February 29th – you don’t get to say that very often, now do you? This year is going way too fast – as years seem to do – so I’m happy to have an extra day. And, since I’m 39, I’m especially glad that this year is a leap year, as it means I get an extra day to be a thirty-something! I also get an extra day to use my February transit pass (note to self: buy March transit pass.), which is nice because it’s annoying that the price of a February transit pass is the same as every other month despite it usually being 2 or 3 days shorter than the other months!

Also, I would be remiss if I didn’t wish my cousin-once-removed, Samantha, a happy 6th birthday, despite the fact that she was born 24 years ago. I have a lot of cousins (14) and cousins-once-removed (10), and even cousins-twice-removed (4)1, so it’s hard to remember all those birthdays, but Sam’s is one I never forget ((I also remember by my cousin Kimberly’s birthday because she was born the day right after Samantha – I remember in early 1992 wondering if I was going to have two leap day babies in my family!)).

Image Credit: Posted by Dan Moyle on Flickr with a Creative Commons license.