In tangentially related news to yesterday’s posting (in that it’s about hockey), I’ve been meaning to post the following two screenshots from the summer season. First up is the stats for the regular season and would you look at that, my name is right at the top1! 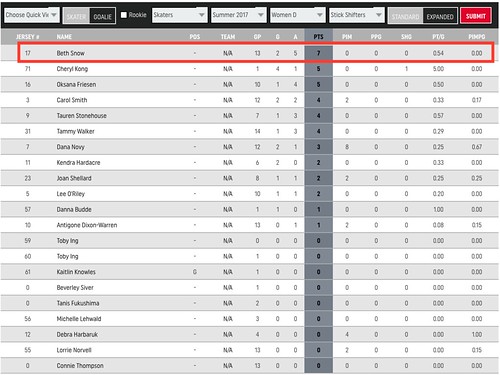 This is the first time I’ve *ever* been the points leader on my team and, since it very may well be the *only* time that ever happens, I figured I should capture it for posterity. I would also like to add that the number of goals I scored is in error – I actually got three, but my third goal was credited to someone else on the team by mistake (the refs and/or scorekeepers don’t always record these things correctly). Which means I should have been second highest goal scorer as well (and the first highest of our regular players, as the person who got the most goals on our team was a spare who scored all of those goals in the one game they played for us). Unless of course one of the other people who are recorded as having 2 goals also had one of their goals erroneously credited to someone else.

Next up is the stats for the playoffs, and would you look at that, there I am at the top again! 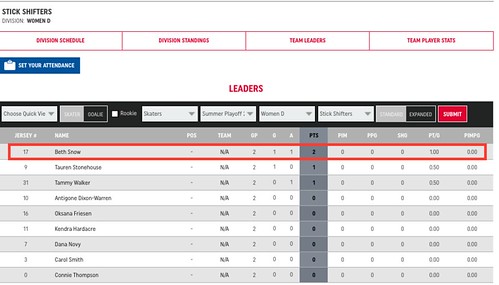 Unfortunately, there was also a scorekeeping error here, as the goal they credited me with was not my goal – it was someone else’s that they gave to me by mistake. So really, it should be a four-way tie for points leaders for the playoffs, with 4 of us each having 1 point (We only played two playoff games before we got knocked out, so not really a lot of opportunity to score goals, especially given that we were last place and we played both our games against first place.) But I still was one of those people, as I got an assist in the first game, so it’s not technically incorrect for me to be at the top of this list.

Now, what accounts for this spectacular showing on the scoreboard, after what feels like ages of me getting very, very few points? I think that it’s probably the fact that I got a new stick:

Guy at @THSgoal who sold me a new hockey stick guaranteed me a goal-per-game. Not true – I scored TWO goals in 1st game I played with it!

But also I have been working out 3 days a week for six months now, so I’m pretty sure that’s not hurting either. At any rate, here’s hoping it continues into this season – I am currently tied for second place (with three other people at 1 point each) for points this season so far (though at only 3 games into the season, it’s probably too early to be bragging about such things. Probably.).