So I have a new hockey team this season – we are called the Penguins! On this team, they have a tradition. The player of the game is awarded a Sidney Crosby stuffy, which they get to keep until the next game. And during that time they must take Sidney on an adventure, which they must photograph and send to the team. Apparently Sidney has gone on a variety of adventures – he’s gone mountain biking, he’s gone to the spa, he’s played dress up, he’s gone for an acupuncture treatment, and so on.

Well, as luck would have it, I was awarded this great honour in my second game on the team, which we played this past Sunday. The honour was bestowed upon me for scoring a goal with just 4 seconds left in the game. The goal was one for the highlight reel – a beautiful wrist shot, top shelf! Or perhaps I just skated up to the goalie, who quite possibly wasn’t expecting anything to actual happen in the last 4 seconds of the game, took a shot right at her which she easily stopped, but it fell between her knees and then when I kept skating towards her hoping to poke at the rebound, she fell over backwards and knocked the puck into her own net. It could have been either of these things, really. I guess we’ll never know! At any rate, my teammate kindly named me player of the game for my never-give-up attitude and making the other team’s goalie, who was quite spectacular all game, look silly. And so it was that I brought this hottie home with me: 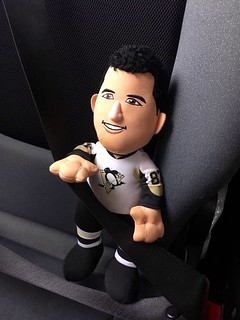 Watson and Crick smelled him for an unusually long time (They smell pretty much everything I bring into the condo, but usually it’s a few sniffs and they are on their way. But the each spent several minutes smelly every inch of this guy!) 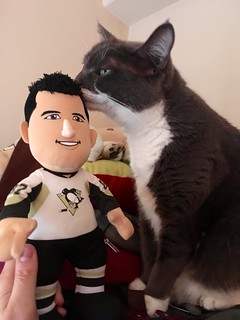 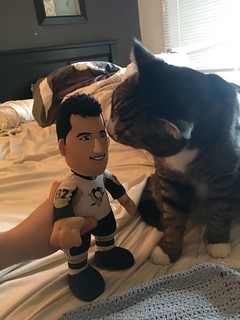 Now, I only had a few days in which to adventure with Sid, as our next game, when I had to pass him along to the next player of the game, was tonight (Wednesday). So I really only had Monday and Tuesday and I was working those days, plus I am teaching a class at UBC on Tuesday nights this semester. So Sidney ended up having a very nerdy adventure. He came to work with me (I actually had him at the table during our team meeting1 and one of my team members was like “He’s staring at me!!”): 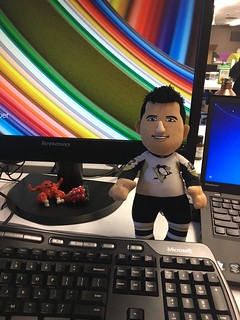 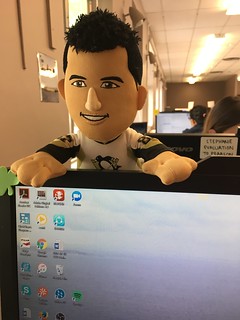 And then on Tuesday night, he helped me give my lecture on business strategy and marketing: 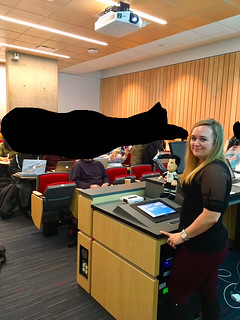 And finally, we ended our hard day’s work with a fine beer from Steel & Oak: 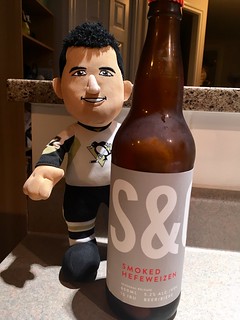