Remember when Apple was in the news for, without telling customers,  slowing down the operation of older iPhones when the battery was low on power (which older phones are all the time because their battery life sucks) or it was cold outside (which is a constant problem for someone like me who is often at a hockey rink)? And then they offered a discount on replacing batteries in the affected iPhone models?

I have desperately needed that battery replacement for quite some time, but I haven’t had a chance1 to get to the store to do it until now (as I am officially on vacation and can do such things as go to a mall in the middle of the day). And even that was prompted by the fact that the discount ends on December 31! So today I went to the Apple store for my replacement battery.

The Apple “genius” ran some diagnostics on my phone was like, “Hmmm, seems this phone is about two and a half years old. That’s usually about the life of these batteries. Hmmmm… oh yeah. Look at this!”

If we do the math, that’s about 1.2 charges per day. Which actually sounds about right, given that the battery has been so bad for the last several months I’ve had to charge it at least twice per day, sometimes more!

And since, as my mother puts it, “my phone is spying on me!”, I decided to check out what I’ve been using up my battery power on. Here’s the breakdown for the past 10 days: 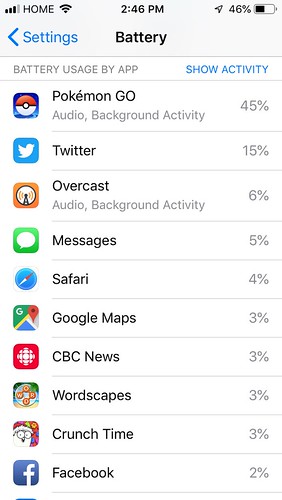 I’m actually surprised that I didn’t spend more battery power on Google Maps, but other than that, this seems about right.

Clearly, I should look into investing in Niantic2