I remember the first time I tried scotch like I were yesterday. I was with some of my nerdy science friends, one of whom worked in a lab where the lounge has an amazing view of the False Creek. So a group of us went there to enjoy the view and drink some scotch. And I thought the scotch was terrible! I did not enjoy the smokey peatiness at all.

And so, for many years, I thought I just didn’t like scotch. It was only fairly recently that I learned that not all scotch is peated and tried some non-peated scotches, which I quite liked.

So on our recent trip to Scotland, we made sure to go to a few scotch distilleries to learn more about it! We went to two distilleries, both of which are very new:

We actually stayed at the Isle of Raasay distillery, which also has guest accommodations attached to the distillery. And when you stay they, they give you this little sample of their Raasay While We Wait single malt scotch whiskey and two scotch glasses (shown in the photo above).

I’ll write more about both of these distilleries whenever I finally get around to properly blogging about that trip. For this posting, I’m going to focus on things that I learned about scotch!

In no particular order:

These are the different regions of Scotland and the types of scotch you get from each: 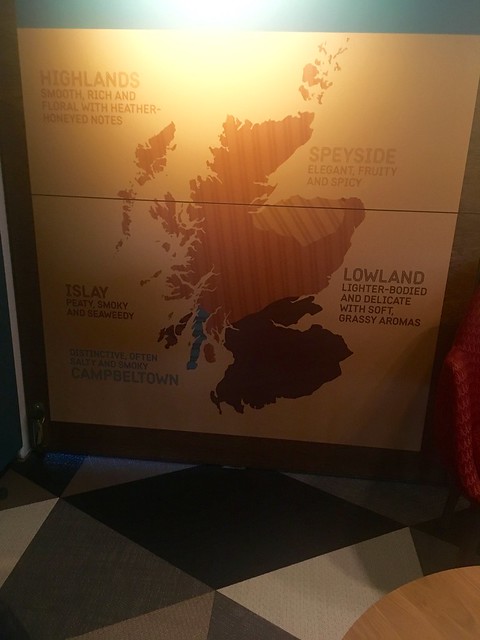 In addition to the two aforementioned, distilleries, we tried to go to Torabhaig Distillery, which we happened to drive by well, but they were closed on Sundays. Here’s a photo of my sneaking past the “no entry” sign.

When we were in Glasgow, we went to a pub called The Pot Still, where they had over 700 whiskies. The bartender there told Scott that you don’t call a scotch whisky “smooth”, you call it “soft”. But then we heard lots of other Scots referring to whisky as “smooth”, and I’ve seen scotches described as “smooth” on packaging for scotch, so I am doubtful that this is true. Regardless, it was a pretty good pub!

We also checked out a place called the Scotch Whisky Experience when we were in Edinburgh. We didn’t do any of their tours, but we did check out their large whisky shop!

While there, Scott bought a bottle of Royal Lochnagar 12 year old single malt:

We were sad that we were only allowed to bring back one bottle of scotch each!