The Penultimate Night of the Year in Our Nation’s Capital

Spent the day driving to Ottawa with my family, as we are going to a friend’s wedding tomorrow night. The invitation says it’s a fancy-schmancy attire sort of occasion, so I’ve got a fancy dress, impractically tall shoes, and even some full length gloves for the occasion. My friends Sarah and Dave and their crew will also be in attendance, so it will be nice to ring in the new year with them. My niece baked the wedding cakes and I hear there’s a late night pierogie bar! Rock on!

I’ve never done a Throw Back Thursday (#TBT) posting before, but today seemed like the perfect opportunity to do one because 10 years ago today two of my favourite people in the world got married and I had the distinct pleasure of being part of their wedding party! 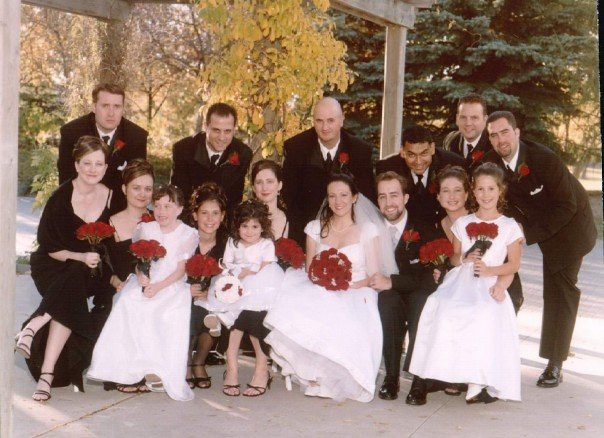 Happy 10th Anniversary, Sarah& Dave! Your love is an inspiration!

P.S. I hope you don’t mind that I stole that photo from your Facebook!

This is the RSVP card for my friends’ wedding. I just *love* the different options for your reply.

So tempted to put “accepts with regret,” just because that’s hilarious! But I think instead I’ll use the write-in option to say “Accepts with the expectation that there will be hot single men in attendance.”

Saturday was Alicia & Paul’s wedding.  It was lovely – everything was beautiful and it is was so obvious how much in love they are. Even the minister pointed out that they had the most passionate kiss he’s ever seen in a wedding! My pictures aren’t all that good, because my camera is just a crappy point-and-shoot and I’m not a particularly good photographer.  Believe it or not, but the fuzzy picture above is probably the best one I got of them!  But this one (below) is one of my favourites of the pictures that I took: Alicia & her mom, Georgina, walking down the aisle. I also, if I do say so myself, loved my own dress: So, congrats to Alicia & Paul, who are in St. Lucia on their honeymoon, so won’t see this posting for a couple of weeks anyway!

To Love, Honour and Kill Spiders For

With all the weddings I’ve been going to lately, and the ensuing discussions about removing “obey” from the old wedding vows, I’ve decided that, should I ever get married again, this post’s title is the vow I would want my partner to make.

In other news, I’ve nearly recovered from the trauma of discovering a wolf spider crawling amongst my dishware. I’m no longer completely terrified1 to enter the kitchen and have even progressed to being able to open up the cupboard in which said monster was found with only minor heart palpitations.

1my terror has been downgraded to merely “severe”.

Look at me, posting at a reasonable hour on a school night! Now let’s see, what have I been meaning to tell y’all about Erika & Paul’s wedding… oh yes, here we go:

This past weekend, I was privileged to witness the marriage of two fantastic people – my good friends, Erika & Paul. I’ve known Erika for several years now – we first met at a science outreach conference where she was representing SFU and I was there on behalf of UBC, but we really got to know each other and become good friends when Erika’s lab moved to UBC and she joined our chapter of the science outreach organization. Erika has managed to juggle completing her Masters (and now working on her PhD), family, friends, teaching, volunteering more hours than there are day (I’m pretty sure she must have a time machine, or an army of clones, because I don’t see how else she could possibly get all the things done that she gets done!). Despite having long hair, she never, ever wears her hair down. I once, in all the years I’ve known her, saw her take her hair down. It was at a bar in London, Ontario and within 2 minutes of her taking it down, it was completely submerged in her beer. I’m not just like the end of her hair either, I’m talking like a good 3 or 4 inches of her hair were sitting in her beer when I pointed this out to her. True story. Erika and I have enjoyed such adventures as pairing up 200 volunteers with 100 teachers one night while she Norway and I was in Vancouver (god bless msn messenger!) and her being the greatest cock block ever (on the same trip to London, Ontario as the above-mentioned hair-in-beer story, but at a different bar). Blog That Needs a New Name readers may remember her in such roles as:

I don’t remember the first time I met Paul, but I’m willing to bet it was at a pub. I can definitely tell you that he was at my half birthday, was a co-host of the 12 Bars and invented “Beth’s Law“. Paul proposed to Erika at the top of the Chief after they hiked up it (how freaking cool is that??). And, get this, he put the ring instead a kindersuprise egg! Now that’s a story to tell the grandkids! Paul has a wicked good sense of humour and is a super nice guy – and I’m really happy that he and Erika got married! W00t!

As for the wedding itself, I have alluded some of the many cool features in my previous two postings, but I’ll elaborate now that I’m not typing under severe sleep deprivation1:

And this concludes my reportings on the wedding adventures of Erika & Paul!

1Just moderate sleep deprivation, so it’s all good.
2the ad for these jewels have an eye where the drops are photoshopped to look like there are sparkly, cut diamonds on your lashes! Good thing I wasn’t expecting that to happen in real life!

How the hell did it get to be this late already? I’m yet again too tired to do anything but phone it in, so today I’ll share with you the best lines from the speeches at Erika & Paul’s wedding:

And here’s a photo, ‘cuz photos make the blog entry longer, so it looks like I wrote more. Worth a thousand words and whatnot. This is me and Erika. I have straightened hair and fancy dress. You can’t really see Erika’s dress that well in this photo, but it was very, very pretty! This photo is notable in that it is one of the few photos of me & Erika in which Erika actually has her eyes open.

Too tired to do the full report tonight, but just thought I’d post a quick message to say that Erika & Paul’s wedding totally rocked1. Great venue2, great vows written by the bride & groom, great speeches, great party and the best first dance I’ve ever seen at a wedding. I mean, how many of you can say you’ve seen Thriller incorporated into a first dance? Other exciting news from yesterday: Linda’s sister Gloria straightened my hair with her flat iron and it looked so wicked good. I totally need a flat iron! And props to Linda who came over to my house to kill a friggin’ wolf spider3 that was crawling through my kitchen cupboard. I’m pretty sure that fact that I screamed like I was being murdered while on the phone with her when I saw it alerted her to the seriousness of predicament.

OK, it’s lights out for little Bethy right now, as it is a school night and I’m up way past my bedtime. Will report more soon. But for now: Congrats Erika & Paul!

1notwithstanding the part where we waited for over 2 hours for a friggin’ cab to come and pick us up and take us to our hotel afterwards.

3 I would link to “wolf spider” on Wikipedia here, to show you just how effing big and effing disgusting these mofos are, but that would risk me actually seeing a picture of one and I’m already going to have a hard enough time getting to sleep just knowing that there was one in my kitchen yesterday. *shudder*

…but there are two “I”s in “Team Icing.” I’m not sure what that means, but I’m putting it out there anyway.

Having just revived from the sugar-induced coma I entered yesterday as a result of just the sugar that was being absorbed through my skin by the end of a day which included preparing over 60 cups of icing, which we then put onto 150 cupcakes (not to mention baking a layer for actual wedding cake too!), I can now share with you, gentle blog reader, the adventure that was Team Cupcake.

As you know, my friend Erika is getting married this weekend. And weddings require cake, in this case, of the cup variety. Erika’s good friend and labmate, Linda, is making the wedding cake, and when I heard that she was to be making scores of cupcakes (for the eating) in addition to the actual wedding cake (for the ceremonial cutting and looking pretty), I offered to help out, as did some of Erika’s other friends. Thus was born: Team Cupcake! Go Team Cupcake!

In addition to Team Cupcake, there was Team Icing, a sub-team of Team Cupcake, consisting of Linda and I. Team Icing spent the day retrieving un-iced cupcakes from the bakery, perfecting the protocol1 for making icing, sending Linda’s sister to the store to procure us further supplies2, using this protocol to produce ridiculous amounts of said icing and preparing the facilities for large-scale assembly line cupcakery. Also, upon discovering that the ridiculous amounts of icing we had prepared were insufficient for our hyper-ridiculous number of cupcakes, we later whipped up another double batch during the cupcake assembly protocol, impressing our fellow Team Cupcake members with our domesticity and skill. Go Team Icing!

Of course, no event would be complete without me whipping out my digicam to take pictures of even the most mundane things, so now I give you a few pics of the day….

…which then went onto assemble-line production of an effing large number of cupcakes, which were further garnished with hand-made icing decorations…

So props to our fearless leader, Linda, the captain of Team Cupcake!

1Linda is also a scientist and in the lab you don’t have recipes, you have protocols. Like recipes, protocols are developed by trial and error and what works at any given time seems to differ from lab to lab (er, kitchen to kitchen) and from day to day.
1 we ran out of clear vanilla. Clear vanilla is the secret to this icing.

But Did I Mention the Bling?

So Sunday night marked the final of Shalu & Deepak’s wedding events – the reception. And so I have photos for your viewing pleasure.

First up, photos of my bling, which I didn’t capture in any of the photos from the wedding ceremony day, although I was actually wearing all of this. And, of course, you have to have the bangles: And, while this is a terrible, bug-eyed photo of me (wherein I’m somewhat reminscint of that runaway bride from a couple of years ago), but it’s the only photo I got where you can (kinda) see my bindis (yes, that’s bindis plural… if you look closely, you can see there’s one beside my left eye): But enough about me, now here’s a photo of Shalu with me: I’m pretty happy with that one, because Shalu and I rarely get good photos together and we actually both look good in this one. Although it’s hard to look bad in beautiful saris! And bling!

And last, but certainly not least, a photo of the happy couple – don’t they look like royalty? And this concludes my reportings on the wedding adventures of Shalu and Deepak. While, at least until we have her bachelorette next month. Yes, we are having the bachelorette *after* the wedding. It’s a long story.