Went to a reading by Chuck Palahniuk* and Douglas Coupland last night. It’s only the second literary reading I’ve ever been to (went to one by Salmon Rushdie a couple of years ago). Palahniuk was actually quite pleased that about half the audience said that they had never been to a literary reading before, as he wants to get people reading who don’t usually read.

Palahniuk read a short story, Mr. Elegant, that has only been read by his workshop group (apparently he has a small group of friends that he workshops with every week), which was pretty cool. He also showed up an hour and a half early to sign books, and stayed afterwards to sign more (saying that if they kicked them out, he would just stand out in the parking lot and sign until everyone who wanted to get something signed, or even just say “hi,” had a chance to do so). I thought that was pretty cool of him.

I got a copy of Fight Club signed (because I’m just a poser and have only read bits and pieces of his other stuff). He gave me a rose. It had a tag on it that said “With all my love.” He also gave a rose to every other person in the audience that said “With all my love,” so I think that maybe he didn’t really give me all his love. He also gave something else out at the end of the session (check out the stamp on my signed copy of the book and see if you can guess what it was). It makes a lot more sense once you’ve read Mr. Elegant. 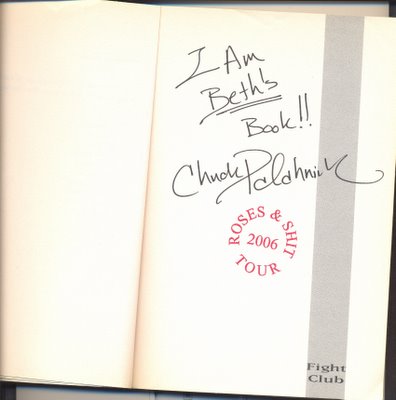 In completely unrelated news (and in my ongoing effort at fair and balanced reporting of the UBC Women’s Rec Hockey scene), I opening the scoring in my hockey game tonight with a goal on my first shift! We won the game, so we are now 2-2-1 on the season and are looking good for making the playoff***.

*I have to say that Wikipedia is freaking fast. I googled Chuck Palahniuk so I could hyperlink his name and when I looked at the Wikipedia page, I saw the photo at the top and I was like, “wow in that photo it looks like he is wearing the exact same thing as he wore last night. What a coincidence!” Then I read the caption. (I would also like to add that that photo appears to have been cropped from a photo in which he has his arm someone… most likely someone whose breast he was groping with a plastic hand with fake blood on it. Seriously. I’m not making that up.

**I’m purposely not linking to my homepage (which is just a page of all the links I usually go to) here. I was going to, but then I realized that if you could see all the the links that I usually go to, you’d find out what a freak I am. So no homepage for you!

***Of course, most seasons all the teams makes the playoffs, so this isn’t really that big a deal.

Update: I just posted this and noticed that it says I posted in at ~9 pm on 28 Feb (which is when I started writing this post, but didn’t finish at that time), even tho it’s actually 2:41 am on 1 March… and my hockey game was last night at 10:45 pm — so, if you believe Blogger, I’m psychic and knew the outcome of the game before it even happened. Silly Blogger!