So I went to an Aggie dinner tonight. Despite being an Aggie for 6 years and never having gone to an Aggie dinner while I was actually a student, I went to one tonight. It was a lot of fun – there were a tonne of people helping out making the dinner. Plus, if you help out making the dinner, you get to eat for free. Which is important when you are unemployed, ur, between jobs… yes, that sounds better.

After dinner, a bunch of us decided to go down to the beach. We got some wood to make a fire. Lugged it all the way to the beach. Then it started to rain. So we abandoned our plan – which was really good because by the time we got back to the Aggie building, it really started to pour down. Sigh. I think it may be autumn now.

So, to remind me of more summery times, I give you this pic of me and my neice, taken when I was visiting Toronto in June: 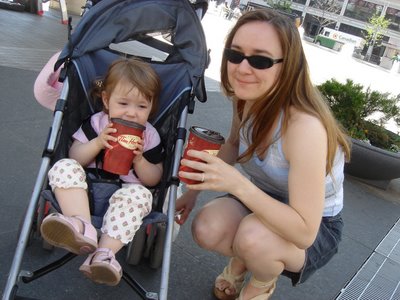 Isn’t she a cutie pie? Wouldn’t we make a great ad for Tim Horton’s?

OK, what else… ah yes, Lukas won Rockstar: Supernova. wOOt! I didn’t want to mention it on here before because whenever I cheer for anyone, they inevitably lose*, but I’ve been watching Supernova for the past few weeks and I totally wanted Lukas to win. And, I will admit it, it is in large part because he’s Canadian. I thought that all of the final four were really good. Oh dear, god, I can’t believe I’m blogging about a reality show. I really need to get a job.

Anson Carter, former Canuck on the Brothers Line, signed with the Columbus Bluejackets today. Boo-urns for Anson Carter. Why, oh, why did you ask for sooo much money to sign with the Canucks? Now you have to go and live in Ohio.

And, um, did I read this correctly. Foreign Affairs Peter McKay being referred to as “eye candy”?? Condi Rice is going after Belinda Stronach‘s sloppy seconds??

So I got a webcam from my friend Rachel and I can’t for the life of me make it work! The computer seems to detect the webcam when I plug it into the USB port, but the software doesn’t seem to recognize it. And I’ve tried a few different software programs that it should work with, but no dice. Other things work in the USB ports, except the digital camera that I sometimes use, which used to work in the USB port, but now doesn’t. Stupid computers.

On a more serious note, can you believe this shooting rampage in Montreal? Two of my cousins go to Dawson College, so I called my aunt to make sure they were OK, which they were (thank goodness). Both of them were at school at the time and one was just on her way in and heard the gunshots as she was going into the atrium… and everyone just started running. I can’t even imagine how terrifying that must have been. And I really can’t get my head around what would make someone do something like this. It’s just so senseless.