These Boots Were Made for Walking

Once upon a time1 I bought a pair of boots. And so beloved were those boots that I wore them everywhere – to work, to clubs, to job interviews, to a blogging conference. They were an integral part of my last two Halloween costumes. Hell, I even wore them to my Ph.D. defence.

Of late, I have noticed that the beautiful pleather2 that gives my boots their shiny goodness was starting to flake off. ‘No matter,’ I thought, ‘It’s just flaking a little bit and you have to look quite carefully at them to notice. They’re still good, they’re still good.’3 But that was before I fell down the stairs. Twice in as many days.

OK, “fell” is probably a little overly dramatic. More like “slid” or “slipped.” The first time I was rushing down the stairs at Granville Station to catch a Skytrain4. I figured that the stairs were just slippery or something. But then the next day I slid down the stairs at my massage therapist’s office, right after getting a nice hour-long massage – and pretty much undoing all the good that the massage had done. ‘What the hell?’ I thought, ‘Why am I suddenly incapable of going down a flight of stairs??’

Then I got a brainstorm: ‘Perhaps I should look at the sole of these boots!’ Um, ya, so the heels of my boots are *completely* devoid of tread. Like, totally, completely 100% tread-less. So I had to admit to myself that it might, just might, be time to find a new pair of boots, as continuing to wear this pair appears to be hazardous to my health and well-being5. So this newfound concern for safety, combined with my jealousy of Stacia’s beautiful new boots, led me on The Search for A New Pair of Boots.

Only one small problem. My boots are too cool. I can’t find anything even remotely as cool. And I went to every shoe store in downtown Vancouver. I found a pair that, while not as perfect in style as my current boots, I could have been happy with in this shoe clearance place in the basement of where The Bay is downtown, but they only had them in size 8.5 or 10, whereas I wear a size 6 shoe6. I found another one in the Shoe Warehouse, but same deal – too big. There were a couple pairs that I tried on at Winners, but they didn’t fit properly – either they’d be way too big for my calves, or they’d put your foot in a weird contorted angle that you know would be very, very uncomfortable after about 5 minutes of walking around. The thing with my current boots is that they are super stylish, but also really comfortable.

All in all, I think I only tried about 5 pairs of boots that looked acceptable but turned out to be too big/small/uncomfortable/weird, but this number was completely dwarfed by the number of boots I had trouble even being in the same room as, let alone be willing to try on or, god forbid, consider buying. Apparently the style this season is stiletto heels7 and ridiculous pointy toes. And I’m not talking just a little pointed. I’m talking the shoe is so exaggeratedly pointed that the toe of your shoe is in a different time zone than you are.

Heading home, dejected, from the boot store which appears also to stock only stupid pointy toed, stiletto boots this season, the answer to all my problems hit like a stroke of divine inspiration8. Where did Beth find her most perfect pair of footwear? eBay, of course! A quick search led me to this pair, the auction for which I just won this morning: 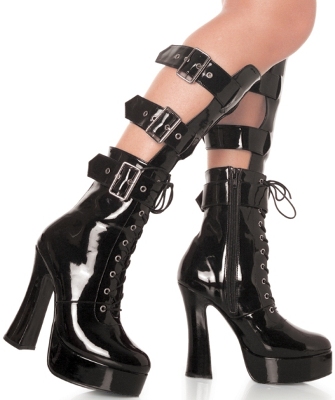 Anyone want to take bets on which will get here first: the eBay boots or the vegetarian marshmallows?

1A.k.a. November 2005.
2Being a vegetarian, I don’t wear leather. Pleather is also way cheaper that leather, but it doesn’t last as long.
3I may have been in denial about the impeding demise of my boots.
4Which, of course, begs the question that Sarah & Dave asked me on one of their visits to Vancouver: “Why are we going DOWN stairs to get to the SKYtrain?”
5Not that I’ve actually stopped wearing them. I just try not to run down stairs in them.
6Which,I was doubly choked that they didn’t fit because they were $100 boots that had been marked down to $25!
7Read: ridiculous uncomfortable. Who the hell thought that putting an entire person’s weight on two millimeter wide sticks was a good idea?
8As previously mentioned, my deity9 may vary from yours.
9and Her sexy shoe obsession.