How Many Hours Does One Spend on Homework in a Part-time MBA Program? The Final Analysis

Hey, remember that time that I did an MBA? That was pretty awesome. And remember how I’m a huge nerd and was tracking all the hours that I spent on said MBA? Also pretty awesome. Anyway, the last time that I provided an updated summary, it was of the data up to the end of summer 2013. So, for completeness sake, I’ve analyzed the full data set, from the beginning of the pre-core program until I handed in my industry paper, the final thing I had to do in my MBA. (Spoiler alert: the final analysis is not much different from what I saw in the preliminary analysis). A few caveats about these data:

And now, to the juicy data!

Overall for the two years, I spent:

If my next best alternative use of that time was to do freelance work and I charged $100/hr as a consultant, that would mean my opportunity cost for that time was $147,2001.

When you break it down to core3 vs. post core, you get the following:

The above tables tells us that:

Now, because I, along with all my classmates swore to our business statistics professor that we would always graph our data, here are some swanky graphs (click to embiggen)! 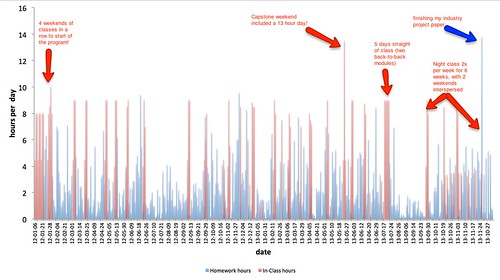 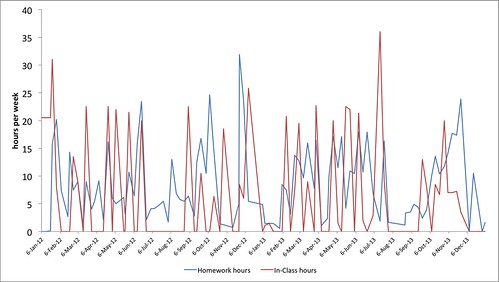 So, in conclusion, I spent a heck of a lot of time on the MBA program. However, you should note that this was my experience, but it differs from others. For example, I spoke to a classmate at graduation who told me that he spent 40 hours per week total, for the whole 28 months of the program4. And I’m sure there are students who spent less time and in different patterns, given what was going on in the lives at various points – a lot can happen in two and a half years! Basically, I’m pretty happy with my time allocation because while it was a huge amount of time and required a lot of sacrifice, I invested the time that was needed to learn what I wanted to and needed to learn, but I still managed to have some fun along the way5. But mostly, I’m happy that it’s done!