Apparently I wanted to spend this weekend past covered in grease, because I spent the lion share of my time biking and cleaning my new BBQ.

On the biking front, a friend of mine recently got a new bike and was wanting to do some biking this weekend, so we decided to bike over to MEC to pick up some bike stuff, then we tested out the route he would ride to work if decided to do that1, and then we decided to try out the Central Valley Greenway, a cycling/pedestrian route that runs basically underneath the Skytrain’s Millennium Line. In total, we biked more than 26 km!

Now, I should point out that I didn’t bike to MEC from my place – that would be crazy. When I bought my bike, I made sure to buy one that I could fit in my Smart Car trunk. In order to do that, I have to take off both wheels, but they are quick release wheels to make the process easier. Unfortunately, since I haven’t taken those wheels off in about a year, the “quick” part of quick release wheel would be better described as “trying-to-remember-how-the-hell-these-wheels-come-off-and-then-how-they-go-back-on-and-now-I’m-all-sweaty-and-covered-in-bicycle-grease” release wheels.

Bike Tangent: I biked to work for the first time about a week ago and have been totally remiss in blogging about it! At Christmas, my mom gave me money to buy a rack and panniers for my bike and somehow it took me until July to actually buy them. But buy them I did and I biked to work and it was super fantastic. I’m very fortunate that the building where I work has a free gym, which means that I have a place to shower when I bike to work. It also has a locked bike room in the parkade to keep your bike in – and the room is in a high traffic location and there are regular security patrols of the parkade, so I feel safe locking my bike up there. And my panniers are like the purse that Hermione has in the 7th Harry Potter book where she fit in all their supplies, including a tent, into a tiny handbag because she put an Undetectable Extension Charm on it. That is to say, I can fit a ridiculous amount of stuff in there2! Sadly, I didn’t bike to work at all last week, as I had a few days where I had to go to offsite meetings and thus needed to have my car, and then it rained. But I did bike to work yesterday and it was just as awesome. 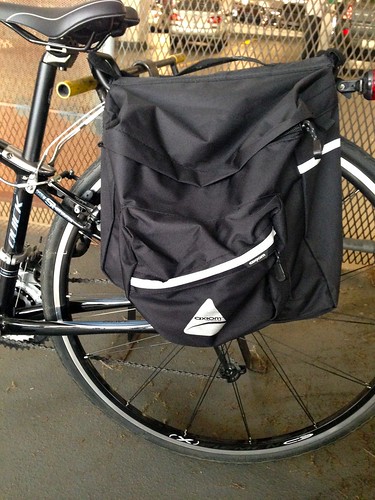 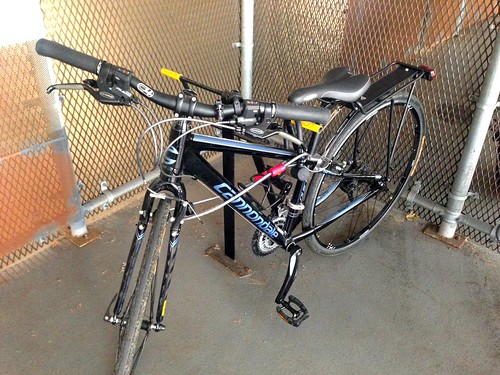 My bike locked up in the bike room

Before I went out biking on Saturday, I went down to Point Roberts to pick up some BBQ grates that I ordered on Amazon.com and had to get shipped there because they don’t ship to Canada. I needed new grates because I acquired a BBQ with my new condo from the seller of the condo, but it turned out that he didn’t clean said BBQ and a few weekends back I tried to clean the existing grates and once I got down past the 87 inches worth of charred grease, I discovered that the grates were completely rusted. Seeing as I prefer to cook my food on something that isn’t likely to kill me, I opted to get some new grates. Before I could use said grates, though, I had to clean the rest of the BBQ. And let me tell you, that was quite a task. Like the old grates, there was about a million inches of charred grease inside the BBQ, which took lots of scrubbing and scrapping to get off. Which did result in my being pretty covered in grease. But in the end, I got it clean enough and then I made some delicious chicken and all was right with the world. 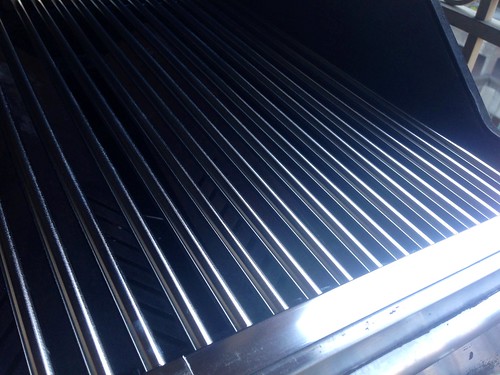 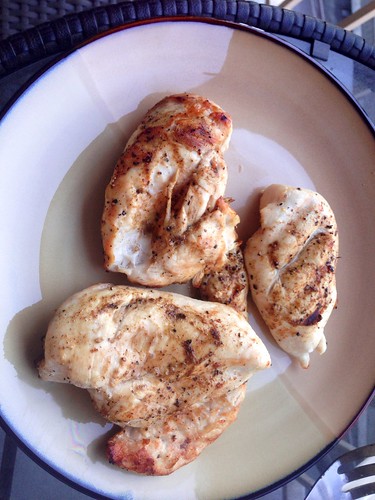 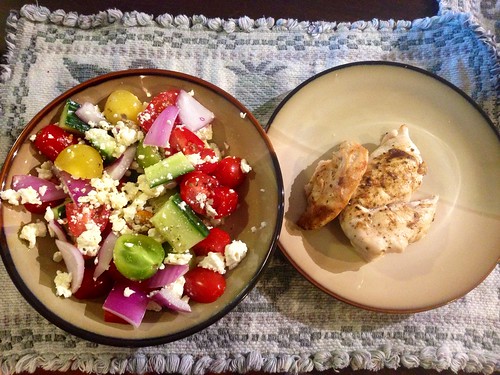 BBQ Tangent: While talking with my mom about my BBQ, she told me about this news story, where a woman ate meat that had been cooked on a BBQ that had been cleaned by a BBQ brush from which wire bristles had broken off and ended up lodged in her throat. Which lead to her needing several surgeries and “12 days in hospital, including eight in the ICU hooked up to both breathing and feeding tubes”!!! So instead of having a BBQ brush, I have a grill stone for cleaning my grill. Which works amazingly, FYI. Also, the previous owner also left behind a BBQ brush, from which half the bristles were either completely missing or broken: 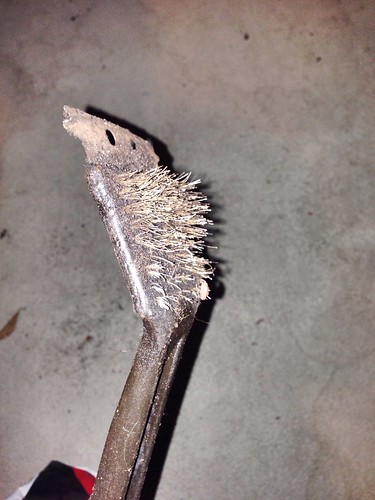 Don’t worry, Mom – I didn’t use that brush. It went right into the garbage after I took that photo!

I have to say, after seeing that brush, I’m *really* glad I decided to buy new grates!