The donut race wasn’t the only blogworthy eating that I did this weekend. Saturday was the Columbia StrEAT Food Truck Fest in New Westminster. For 6+ hours, Columbia St (a.k.a., right outside my front door) was lined for as far as the eye could see with 70 food trucks (plus 30 other “food outlets”1.) And the street was packed – it seemed like every truck had a line at least 15 people long and many much longer2. Apparently, an estimated 90,000 attended!

In addition to all the trucks, there was entertainment, like a “chalk zone” for kiddies to draw on the street with sidewalk chalk, dance lessons from a swing dance group, and not one but *two* busker tents hosted by the Arts Council of New West. As you may recall, I’m on the board of the ACNW and on Saturday I did my boardly duty of volunteering at one of the busker tents. Which basically meant being around the tent in case the buskers needed anything and mostly just enjoying the music. Here’s one of them – a father-daughter pair named Roland and Emma Nipp:

During my volunteer shift, I had my dinner #1 – an Australian meat pie from the Aussie Pie Guy. 3 Omg, that might just be the best meat pie I’ve ever eaten!

I had great intentions of photographing all my meals, which lasted exactly one photo: 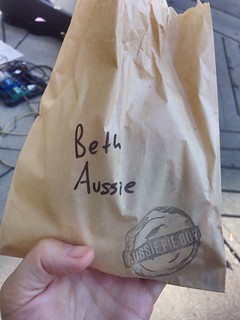 At the end of my shift, Daniel and the kids showed up, and we went off in search of their dinner (and my dinner #2). There were sooo many options that it was hard to choose, but in the end Daniel got a pulled pork sandwich (I can’t remember from which truck) and the kids and I settled on some tacotinas (for the kids) and a burrito (for me) from Arturo’s. Next up was ice cream from Rocky Point Ice Cream, but I was too full to have any! The kids, however, seemed quite enjoy their salted caramel ice cream!

After that, we decided to head to my apartment so the kids could play with the cats and, much to my surprise, you could hear the music from the busker’s tent in my place. It was a clear as if they were performing *in* my living room!

In conclusion: A++. Would food truck again.