… I’ll be running the Hollywood Half Marathon!

Now that the plague that had infected my lungs is down to a mere biosafety level of 2.5, I’ve been able to get out and do a couple of runs this week, confirming that I can, in fact, break the previously-elusive (at least in the past 3 weeks) 7 min/km barrier. So I might just finish this race in a halfway decent time after all1. But, as is the case with all my races in the last few years, I’ve downgraded my goal from “personal best” to “hope it’s not my worst time!” Actually, my hopes are a wee bit higher than that. Here’s the graph of all my half marathon race times:

As you can see, I managed in my most recent race to turn the tide of the downward spiral I was in (remembering that this is a graph of race finish times, meaning higher is worse) and it would be just peachy if I could continue that and  beat my time from the Fall Classic of 2:17:25. Honestly, I’d be happy with a 2:15.

More importantly, though, my two runs this week were actually enjoyable. They were short and quickly (for me) run and along the pretty riverfront and dry and zombies were chasing me2

Also, my Runkeeper app tells me that I’ve achieved 32% of my running goal for the year: 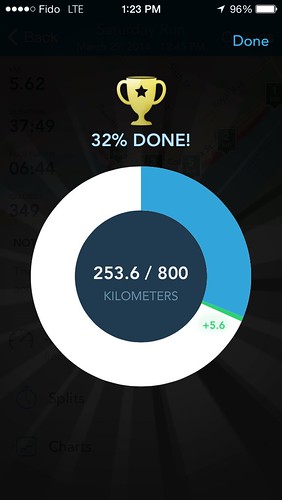 And we aren’t even quite 25% of the way through the year! If I managed to do that during the hardest part of the year to run, I think that I’m going to crush this goal now that the better weather and long days are here!