If you see me sprinting along the pier, it’s only because I’m being chased by zombies 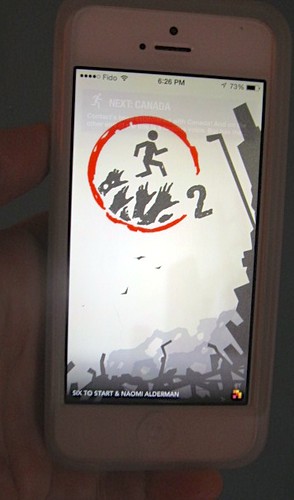 So, I totally thought that I’d written a blog posting about this before, but apparently not. Sometimes I compose blog postings in my brain when I’m not in a position to write stuff down and then forget that I never actually wrote them down1. Clearly, this is one of those situations.

One of my favourite apps is the “Zombies, Run!” app 2. The basic idea behind the app is that it tracks your running while you listen to a story where you are a character in a zombie apocalypse. The other characters are from your home base and are talking to you over a radio headset (their voices conveniently brought to you through the headphones of your phone) as you go out into the zombie-infested world on supply runs, rescue missions, and the like. There are some parts where they are talking to you – say, for example, giving you instructions of where to run and what supplies to grab when you get there – and then other parts where you just listen to your music – where you are just running to the specified location. If you want to do some interval training, you can select a setting where, during the parts where you are listening to your music, you can be chased by zombies. You’ll get a warning: “Zombies, 50 metres!” and then you have to start sprinting to some speed faster than you were running3 and you have to keep up the sprint for some time4 in order to evade the horde. If you aren’t going fast enough, you’ll hear “Zombies, 20 metres!” accompanied by the groans of the undead. No matter how tired, I am, I always seem to have the energy to sprint when I hear those groans!

I like this app for several reasons – first and foremost, the story is just interesting. It’s well written and well acted. Since I want to hear what happens next in the story, it motivates me to want to go out for a run! And once I’m out running, I can lose myself in the story and not pay so much attention to physical act of running – I just get into the zone and keep going. Second, it makes interval training fun. I usually listen to the app when I’m running along the pier – I figure that’s safer than running on streets where I might inadvertently end up running out into traffic to avoid an undead horde. And I really do sprint hard when I hear those zombie moans. One time I was out running along the pier and a zombie chase happened just as I saw a friend of mine walking – ordinarily I’d stop to say “hello”, but I just took off on a sprint! (Fortunately, I saw her again when I was running back and could tell her why I’d sprinted away!). I also find myself looking at my surroundings in a different way – could a zombie be hiding in that bush? Are those slow walking people up ahead alive or undead? Who is in that helicopter overhead5?

There’s a whole other side to the game where, as you are running, you pick up items along the way – maybe some batteries or canned foods or, for some reason, sports bras. If this app is to be believed, the landscape of a zombie apocalypse will be littered with sports bras. I believe you can log in to their website and do something with all the virtual goods you collect, but I honestly have no idea how any of that works.

Although the app does track your runs, I still track my apps on Runkeeper6 simultaneously, as I don’t do all my runs using the zombie app and I want to have all my runs recorded in the same place.

I’m currently on episode 6 of season 2 – which is 40 episodes long, plus 24 side missions7. Season 3 is going to be released in April8, so clearly I need to do some running to catch up!