Near the end of my training for the BMO half, I noticed that I was getting a bit of shin splints, which, for me, is generally a sign that I need a new pair of running shoes. I thought it was kind of odd, since I didn’t think I’d had them all that long. A quick search of yew old blog showed that I’d gotten them on Oct 4, 2014, which means I’d only done the Rock’n’Roll 10 km race in October, plus the training for BMO. A search of ye old RunKeeper tells me that is only a mere 449.2 km that I’d run in them. My previous pair, which I got in September 2013, lasted me through half the training for the Fall Classic (plus the race itself), and the training for (and the races) the Hollywood Half Marathon AND Scotiabank 2014! That’s a whopping total of 901.4 km!

Anyway, by the time I realized that I needed some new shoes, it was too close to race day to break in a new pair, so I decided to just suck it up and wait until after the race. I’ve done a few runs since my race and each time, I’ve been feeling the shin splints and thinking “Oh right, I was supposed to go buy some new shoes!”

So on Saturday I headed over to the Running Room1 and, much to my delight, discovered they were having a sidewalk sale! I had brought my old shoes, as the salespeople there often like to take a look at how the shoes have worn out in order to help you find a new pair. I talked to a few salespeople, all of whom thought I was crazy when I said that I can usually get two half marathons worth of training out of single pair of runners. “I get new running shoes every 3-4 months,” said one. Good thing she has an employee discount!

Now, my usual MO when I go running shoe shopping is to bring in my old shoes, have the salesperson watch my walk and run, whereupon they say that I need a neutral shoe2. I feel it’s only fair to try on all the shoes just in case there is another one that is better, but the vast majority of the time, the Nimbus seems like it was made just for my feet!

The problem I faced on Saturday, however, was that they had the exact model of the Asics Nimbus that I had just worn out on sale (since it’s last season’s model and they are unloading them to make room for the new model). Despite *hating* the horrible pink colour, I actually quite liked them when I first got them and for most of the time I ran in them, but they wore out twice as quick as my shoes usually do. Thus, I was a hesitant to buy them again, though as one salesperson pointed out, since they are on sale ($130), if they wear out faster, it might even out because I paid less for them. The salesperson also found that they had the exact same model of Asics Nimbus, but in a non-hideous colour! (Where was that when I was buying them the first time??). So, as usual, I tried on every pair of neutral shoe that they had, and the Nimbus came out on top. However, there was also a pair of Saucony that I like almost as much, and it was only $70. So I hemmed and hawed and pretty much drove the staff nuts with my hemming and hawing, but in the end I decided to get both pairs. I figured that since they were on sale, I was getting two pairs for not much more than I usually pay for one pair. I am planning to use the Saucony pair for my short runs and my Asics pair for my long runs, figuring the Asics will last a bit longer since I won’t be putting all my miles on them and I won’t mind the Saucony ones being not quite as comfy as the Asics, since I won’t be wearing them out for long runs. I’m also considering that I might leave the Saucony pair at work as my lunch time running shoe and use the Asics for runs at home. It’s like having home and away jerseys, but they are shoes.

Anyhoo, this has been a much longer posting then I thought it would and probably no one is still reading. But every Requisite New Running Shoe Blog Posting must also have a photo of said running shoes and I am pleased to report that the era of the hideously garish running shoe has come to a close. Also, to reward anyone who is still reading, there is also a cat in the photo. 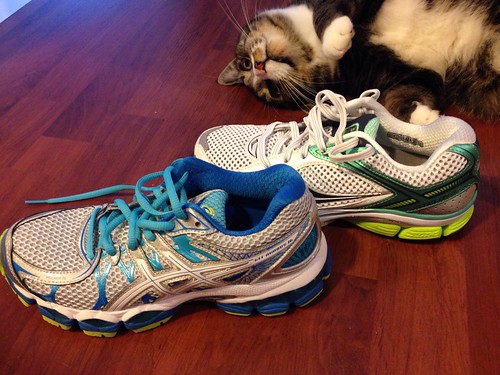