I was stunned as I crossed the finish line of the Hollywood half marathon yesterday – I finished in just under 2 hours and 10 minutes! As you may recall, my hope going into the race was to beat 2:17 my time from the Fall Classic – and so I was thinking that I’d be really happy with a 2:15 finish. Though my training started off strong with the running study from Nov to early Feb, my training over the last month left a lot to be desired, thanks to darkness, snain and having the plague, to the point that though I did all the long runs, I really didn’t do much in the way of speedwork or hill training. But it turned out to be fantastic conditions for running, a great race atmosphere, and I guess I hadn’t lost all my training from the running study after all. 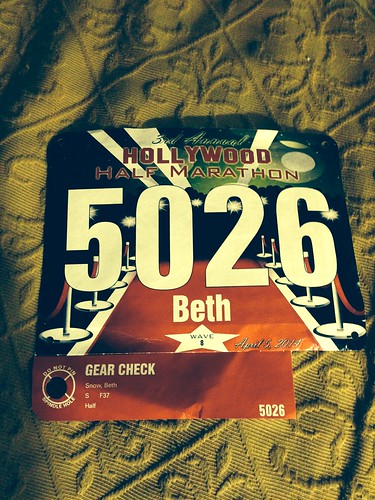 The race started at 6 am yesterday, so after we arrived in Hollywood on Friday, we took it relatively easy – walked around checking out some sites, had some lunch (at what turned out to be a rather lacklustre pub), walked around some more, noticed that The Book of Mormon was playing at the Pantages Theatre, so we popped in there and were able to score tickets for the Saturday night show, went to the race expo to pick up our race packages and take advantage of the free massages1, walked around some more, went for dinner at the Hard Rock (where our waitress was an aspiring actress from Montreal2 – and so recognized that we were Canadians when she saw Alicia’s CIBC Visa card3!), found our way to Trader Joe’s4 where I got some dark chocolate dipped marshmallows (made in France) and, if you can believe it, maple cookies (made in Canada!)5. 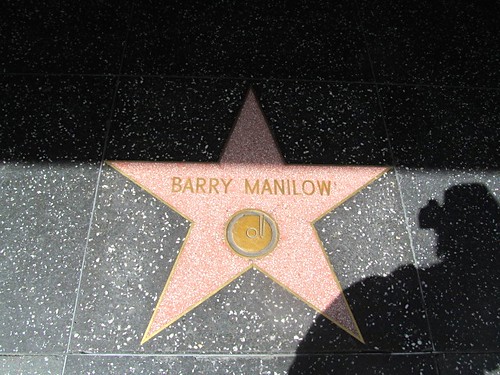 Mom, I took this photo for you!

Then we headed back to the hotel to get to bed at a reasonable hour – and we set 4 different alarms just to be sure we’d wake up early enough to have some breakfast and get ready for the race. Fortunately, our hotel was about a 3 minute walk to the start line, so we didn’t need to get extra early for travel time, and we didn’t even have to check any gear. With a 6 am start, we were lined up before sunrise, but I decided to wear running shorts and a T-shirt, as I figured once the sun did come up, I’d be pretty warm given all the running. I was a bit concerned that I might be freezing before the race got going, and though it was only 12 degrees C, it didn’t feel that cold and I was very glad that I didn’t have long sleeves or pants once the race got going, as it was reasonably warm and I was pretty sweaty by the end. The race was packed and we were in corral 8, so it was a nearly 15 minutes after gun time start that we actually reached the start line. 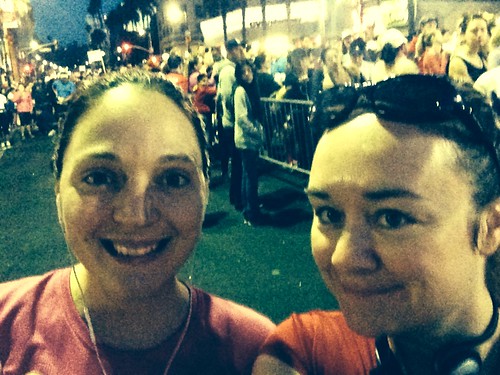 The quality of our pre-race photo is subpar because the sun hadn’t even risen yet and iPhones don’t take very good photos in low light. But here we are, ready to go!

The race was so packed that the first ~5 km of the race involved a lot of looking for gaps in the crowd and trying to squeeze through them. Pretty soon into the race, my GPS pinged off something far away, so my Runkeeper app thought I had run much further than I had and since I use Runkeeper to tell me my pace, I had no idea how fast I was running – as it was calculating my pace based on the wrong distance. I knew I was running faster than I’m used to – which has been about 7 mins/km for the last several long runs – but was pretty sure I wasn’t doing a 4:23 minute/km that it said I was doing. We did notice that were we well ahead of the 2:15 pace bunny, but I thought that she must have been mistiming her pace, because I didn’t think we were that much faster. I mean, I felt like I was running faster than normal – we were concentrating on running strong and in order to focus our energy on running, we weren’t even talking to each other like we usually do on our training runs and in many of our races, but I didn’t feel like I was on pace for a 2:10! I actually felt great – the sun was out, there were lots of bands playing music along the course, and lots of fans on the road side cheering on the runners, I felt strong and had a big smile on my face. There were a few points where I started to feel like I was slowing down a bit and had to dig a bit deeper to get my speed back up, but then I’d hit a small downhill stretch or band playing a great song and I felt good again. As got to what I think was around the 16 or 17 km mark6, I decided I needed a bit more help, so I turned on my music7 and it totally gave me a burst of energy to keep up the pace for that last 5 km. As I sprinted towards the finish line, I saw that the clock said ~2:24, and I thought, “Yeah, that 2:15 pace bunny (who was still quite a ways behind me), must be wrong,” as I figured it had taken us maybe 10 mins to cross the start line (there was no clock at the start line – or if there was, I didn’t see it). But immediately upon crossing the finish line, I stopped my Runkeeper app (though the distance was wrong on it, I knew the time would be correct) and was flabbergasted to see my time was just under 2:10! My best time ever was a 2:07:23, followed by a 2:10:48, so instead of just my hoped-for slightly-better-than November’s 2:17, I shave SEVEN MINUTES off my time and registered my second best of my 10 half marathons! I’d been starting to think that a 2 hour half was just out of my reach, but now I’m questioning that. I think that if I drop the remaining 8 lbs to get back to my pre-MBA weight8, and did some serious speedwork and hill training, a sub-2 hour half might just be possible for the Scotiabank half marathon in late June! 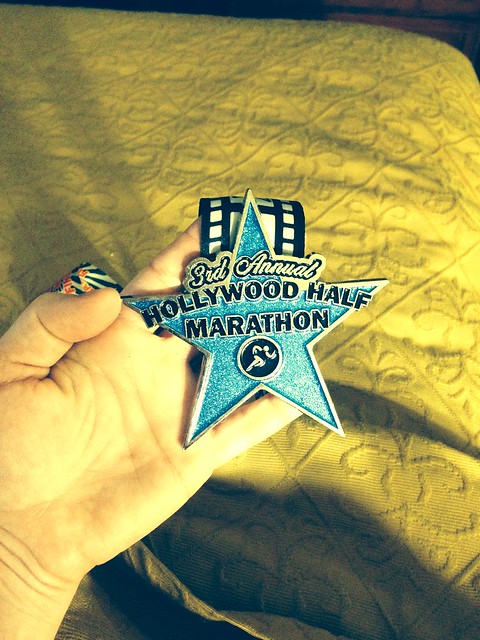 The really nice thing about a race starting at 6 am is that it gives you the entire rest of the day to do other things. After collecting our beautiful blingy Hollywood star shaped race medals and some delicious, delicious post-race food, we strolled leisurely back to our hotel9, where we showed and got prettied up and then headed out for some sightseeing. 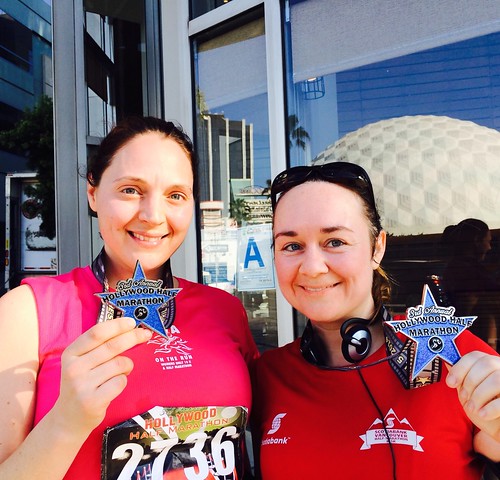 I think we look pretty good for having just run a half marathon!

We decided that we wanted to check out the Santa Monica pier, which was about 50 minutes away by bus. That turned out to be a perfect amount of time to rest our legs and see the sights along the way – we went through West Hollywood, Beverly Hills and a few other places that I can’t remember at the moment. By the time we got to Santa Monica, we were pretty hungry, so we were delighted to discover that they had way more – and much better – restaurants than were available around our hotel in Hollywood. We decided on a French bistro where we had a cheese board that was to die for and one of the best eggs benny I’ve ever had. 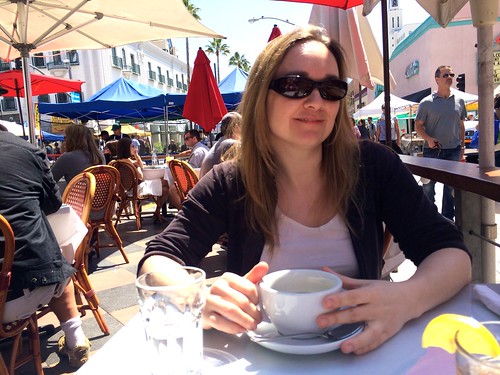 Fully satiated by this, we strolled down to the beach and walked on the warmest, softest sand you can imagine. I think that walking on a warm, soft, sandy beach might be the best thing ever after running a half marathon! After that we checked out the pier, then did a bit of jewelry shopping, and I think it was quite possibly the most perfect, leisurely afternoon in the history of ever. We headed back on the bus and then stopped off at a Target for some of the most efficient shopping ever. Like with Trader Joe’s, this was the first time I’d ever been to a real Target (the Targets in Canada are really just Zellers with a different logo). I picked up a new briefcase-ish bag for work, a new wallet (as mine was falling apart) and a birthday present for my nephew! Alicia also got a new bag, plus a bunch of stuff for her kids. By the time we got back to the hotel, it was almost 6 pm and since we knew we had a 30 min walk to the theatre, we quickly changed into our theatre-appropriate dresses, touched up our makeup, and decided on which our many jewelry purchases from Santa Monica went best with our outfits and headed out to grab some dinner before the show, which started at 8 pm. What we hadn’t counted on was that our walking speed would be considerably slower than normal, given the half marathon plus a full day of walking after that, so it took us about 45 minutes to get to the theatre. Happily, we found a nice restaurant where we could get seated right away and had appies (spinach and artichoke dip, plus truffle parmesan fries!) for dinner, so we got to the theatre with time to spare. 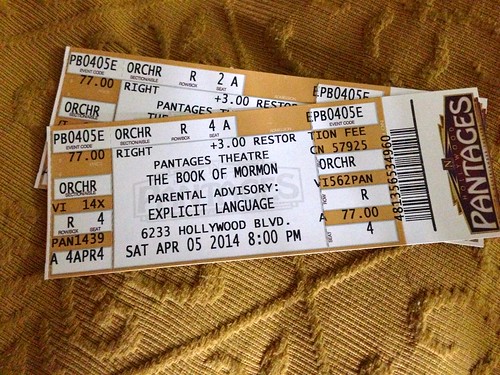 The show was absolutely amazing. Both of us had heard that The Book of Mormon was great (and, really, they don’t give 9 Tonys to a bad show, right?), but didn’t really know anything about the plot. The show really did the live up to the hype – the songs were fantastic, the cast was unbelievably talented (I could not believe the range of the guy who played Elder Cunningham) and the entire thing was so freaking hilarious. Absolutely worth every penny! After the show, we grabbed a cab back to the hotel (the theatre was pretty much where the finish line of the race was, but our legs really were done and it was rather late and we had to get up early to catch the shuttle to the airport), quickly packed our bags, and hit the hay (again setting four different alarms to make sure we wouldn’t oversleep!).

When going through security at the airport, my race medal caused a bit of consternation in the xray. I could see that a few people were looking puzzled as they examined the xray of my bag and I knew immediately what the cause was. So they had to search through my bag to try to find it and, of course, since I’d hastily packed the night before I couldn’t remember exactly where I’d put it. After emptying my whole bag10, they eventually found it inside the bag I’d bought at Target! So it all went through the xray again, this time with the medal in its own plastic bin and then finally we got to be on our way.

All in all, it was pretty much a perfect trip and I think Alicia and I now have a taste for destination half marathons. At brunch we discussed several options – Rome, Paris, Hawaii, and Iceland were ones that came up, just to name a few. But that won’t be until next year, so we’ve got time to think about it.

Also, for the record, my official finish time was 2:09:57.3, making me 162nd out of 607 in my age/sex category – that’s the 73rd percentile11. Not too shabby!12. And as you can see, this new addition to my graph of half marathon times looks pretty awesome (remember, it’s race finish time, so shorter is better!): 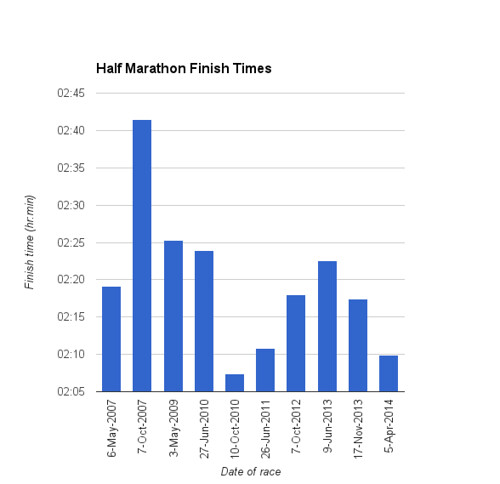 3 Responses to Half Marathon #10 – Milestone Achieved!