You came into my life just over five years ago and I promised to take you to all sorts of wondrous places. And while I didn’t take you to most of the places on the list of places I said I would like to take you, I took you to a bunch of other places instead. Because I’m spontaneously like that.

We did go to London – the only city on the list – but then we went to a whole bunch of places I didn’t even think to put on the list. In addition to the stamps from Heathrow, you have stamps from Dublin, Zürich, and Geneva – the latter two of which were just stopovers in airports – and you accompanied me to France and Monaco, though we got no stamps in either of those places. And of course, there were trips to the USA – you got stamped when we went to Hollywood, California, to San Francisco, and to Kansas City, MO by plane – and you didn’t get stamped when we went to Portland or to Seattle by car. It’s not nearly as much travel as I would like to have done in the past five years – noticeably absent from this list is any glorious tropical locations – but I truly did enjoy all the places we went.

As much fun as our adventures have been, our time together is coming to an end. Your expiry dates looms and that means I have to trade you in for a newer model. I’ve had my terrible passport photos taken and I’ve filled out my Simplified Renewal Passport Application, and I’ll drop those things off, along with you, at the Service Canada office tomorrow and then will eagerly await your replacement, which will be valid for a glorious 10 years. 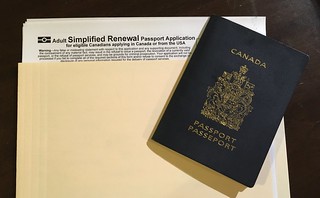 But I’ve specifically checked the box requesting you be returned to me:

The next time I see you after that you’ll be mutilated – a big red “Cancelled” will be stamped in you and your corner will be cut off so that no one will mistake you for a valid document. But you’ll still have your stamps of the places we went together – and as you were the passport that was with my on the first time I left the continent, you’ll always hold a special place in my heart.

2 Replies to “Dear My Old Passport”