I’ve had my condo for more than four years now and decided it was high time to give the place a little makeover. When I bought my place, I only had a few days to move in due to multiple trips that were happening around the same time. I figured that the paint in the place at the time was OK – I didn’t love the dark brown wall in my bedroom and the beige walls throughout the place were not the colour I would have picked, but it didn’t look terrible and I’d also spent all the money I had buying the place, so didn’t really have the money floating around for unnecessary things like painting. But I grew bored of it, and there were some imperfections in the previous paint job (like brush strokes in a corner of the bathroom from where the painter didn’t do a good job of paint coverage). So I consulted with my good friend Lianna, who is a graphic designer, and she recommended a friend of hers who is a painter, and now my place looks so bright and clean! So while I can’t add “learned to paint a condo” to my list of things I learned this year, I did learn some interesting things through the process.

When I had my condo painted, my painters told me that the paper on some of my drywall had come loose in some places. I have never really given much thought to drywall before, but she said that it happens when you hang things on the wall and then remove them – it pulls at the paper on the drywall and over the years if you do this enough times, eventually you’ll need to replace the drywall. I had no idea!

Drywall (also known as plasterboard, wallboard, gypsum panel, sheet rock, or gypsum board) is a panel made of calcium sulfate dihydrate (gypsum), with or without additives, typically extruded between thick sheets of facer and backer paper, utilized in the construction of interior walls and ceilings.[1] The plaster is mixed with fiber (typically paper and/or fibreglass or asbestos), plasticizer, foaming agent, and various additives that can decrease mildew, increase fire resistance, and lower water absorption.

Anyway, no posting about home improvements would be complete without photos, so here’s the before colour: 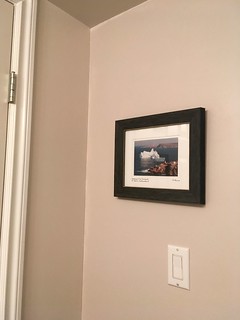 And here’s a couple of examples of the poor paint job done by whoever painted this place before I bought it: 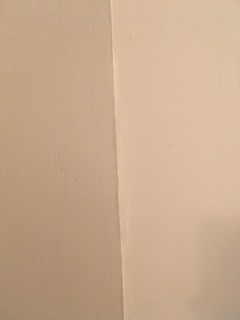 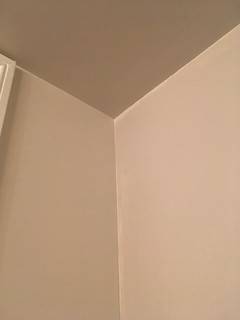 See how you can see the brush strokes where they didn’t fully cover the wall in the corner? Ugh! 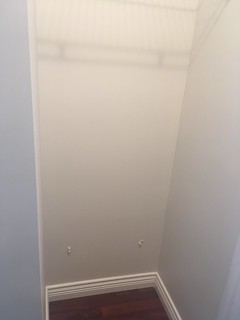 I decided to go with a fairly neutral colour as I get bored of things easily, so I didn’t want to pick a colour and then not like it anymore in a year. This way, I can add colour to the place by hanging paintings on my wall or have pillows on my couch and when I get bored of the colour, I can swap them out with different accessories.

In addition to the paint, I also replaced the closest door in my spare room because it was ridiculously broken. It was one of those sliding mirror doors that you often see in condos and the tracks were so bent that you couldn’t slide the doors – and some of the wheels had fallen off the doors (probably from trying to slide the door through the bent tracks), and then a piece of the frame fell off too.

Here’s the old mirrored door, with missing frame and opened because I couldn’t get it to slide closed anymore – plus, mess instead the closet: 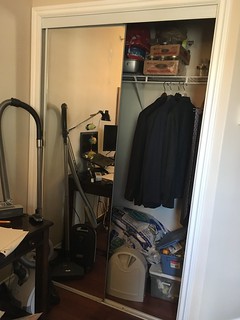 Instead of replacing it with a mirrored door though, I decided to get something a little nicer. I was a tad bit worried that not having the mirror there might make the room feel smaller, but I actually think that it makes the room feel better (probably because the room is rather messy, so a mirror just made it look like a bigger mess!): 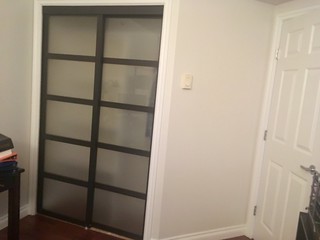 And in addition to the new door, we also got a closet organizer installed, so that all the stuff in that closet2 is neatly organized.

I have to say, I love this door a lot. Every time I open it and it slides so smoothly3, it makes me smile!

I still have a bit of work to do – for example, when we removed the track from the old closest door from the floor, we learned that when the place was built, they had installed the flooring around that track, so there’s now a gap in the flooring where that track was (the new door is only attached at the top, so it doesn’t have a floor track). So I need to get some stain to at least colour that spot to match the rest of the floor.

I also want to build a closet organizer in the front hall closet, which is currently a jumbly mess of coats, shoes, bags, and various other crap.

And I also kind of want to paint inside the closets because I didn’t bother to get them painted when I painted the condo, thinking “who even sees inside the closets?” but I have leftover paint and am now like “OMG, I hate the inside of these closets!).