Translation of the title (assuming that Google Translate translated it correctly): My 13th half marathon: not the result I was hoping for, but I figure if I write this title in French it will sound more impressive.

I was hoping to have called this blog posting “Lucky #13” and to be writing about how I’d finally run the elusive sub-2 hour half marathon that I’ve been aiming for, but alas, it was not to be. In fact, I didn’t even beat my time in the BMO Vancouver half marathon in May, as I clocked in at 2:03:07 in yesterday’s race, compared to 2:02:24 in May.

Those 43 extra seconds, however, are likely due to the fact that I had to take a pee break during the race because I was waiting 45 minutes from the time the race started and when I actually crossed the *start* line. The race started on Pont Jacques Cartier (i.e., a really big bridge in Montreal), so the pre-race portapotties were just before you go on the bridge, so we went pee there and then had to walk eleventy billion miles to get to the corrals. I was in corral number 17 (of 26) – they put runners in corrals by speed, so the fast people are in the first corral, then the next fastest and so on. Daniel was in corral number 2, so we went up to our corrals about 10 or so minutes before the 8:30 am start time.

The first thing I noticed in my corral was The Flash, so naturally I asked for a selfie with him: 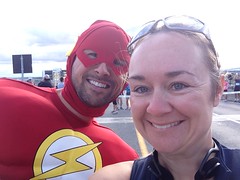 Then I spent 45 minutes looking at this: 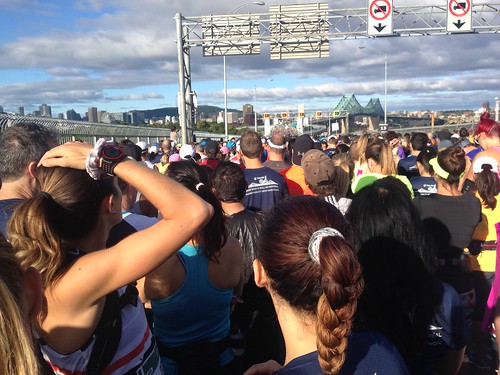 Because that’s how long it took for all the runners in the corrals ahead of me to go.

Also, did I mention that it was eleventy billion degrees below zero? And I was dressed in a tank top and shorts because it was going to warm up to 21 degrees, so basically after waiting – did I mention? – FORTY-FIVE minutes!! I was frozen and I had to pee again! 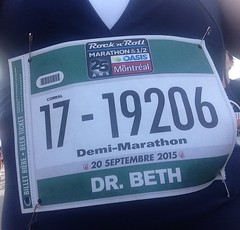 So I finally got to start running at 9:15 am, at which point I was so cold that I couldn’t feel my hands or my feet. It was really weird to be running and not be able to feel my feet! I contemplated whether I could run the whole race without stopping to pee, but I realized that I had to pee so badly that if I tried that, I wouldn’t be able to run as fast and I’d probably end up taking a pee break later anyway, so I should just stop at the first opportunity. I saw a bunch of people peeing in bushes in the first few kilometres, but then I saw a sign in some of the bushes that said “Beware – Poison Ivy”, so I decided to keep running until I found portapotties. At about the 4 km mark, I found some and went pee and I’m pretty sure that it took me 43 seconds (give or take).

After that, I felt much better – not only did I no longer have to pee, but I’d warmed up enough that my hands and feet had regained feeling. The next many kilometres I actually felt good – I was running at a good pace and feeling strong. I was using my Runkeeper app to tell me my pace1 every km, but because I’d taken a slight detour to the portapotty and also because GPS is imperfect, the pace it was reporting was a bit off – it would tell me I’d reached a kilometre about 200 m before I hit the kilometre marker. Which meant that the app was thinking that I had run further than I had and thus, was reporting a pace that was faster than my actual pace. Unfortunately, I suck at math in my head at the best of times, so I certainly could not figure out the correction required to know my actual pace while exerting myself on the run! However, since the app was telling me that I was a bit faster than my target pace for most of the race, I figured I was in the ballpark.

It definitely started to feel harder in the last third of the race and I knew from looking at the elevation map prior to the race that I’d be running up some hills toward the end of the race, including a big one in the last ~1km.

My mom, my sister, my niece, and my nephew had driven out to from Toronto to watch the race, as had Sarah & Dave and their kiddies from Ottawa; I knew they were intended to be at about the 19 km mark and I managed to see my family, who were on the far side of the road, but completely missing seeing Sarah & Dave et al, who were on the side of the road closet to where I was running! Seeing friendly faces in the crowd always gives you a boost when you are running!

The big hill, however, had the opposite effect. It was steeper and longer than I had envisioned based on the elevation map, so it definitely slowed me down, but once I caught my breath after cresting the hill, I decided that with just 1 km to go and being somewhere in the ballpark of meeting my goal, I would increase my speed as best as I could without dying and then sprint once I saw the finish line. So I did all that and when I got across the finish line, I stopped my Runkeeper app and looked expectantly at my time, thinking I was reasonably close to my goal. But much to my surprise, it said 2:03! Wtf? I really thought I was close, but it turned out I’d done worse than my run in May! Not by a lot, but still. This made my very grumpy, as all I could think was “I trained for 4 months to get slower. I should have just sat on my couch eating Doritos for the past 4 months!”

On the plus side, while I didn’t achieve my top goal – run a sub-2hr half marathon – I did achieve my consolation goal, which was to run my first half marathon where I don’t do 10 and 1s. So there’s that. And I suspect from the results of my second fitness assessment, that it was my insufficient zone 3 training that prevented me from achieving the elusive sub 2-hr half. I did do my zone 3 training after that assessment, but it was too little, too late. So at least I know for next time2

The way this race was set up, all the half marathoners and the full marathoners started together. Daniel started at 8:30 and, since I was told I should expect to start at 8:45, I expected to be done around 10:45, which would give me enough time to get my medal, my post-race food, and find my family and friends, and make way back to the finish line to watch Daniel complete his race around 11:45. However, since I started at 9:15, I didn’t finish until 11:18, which was not enough time to do those things, so I didn’t even get to see Daniel finish. He set a new personal best of 3:17, putting him 1 minute better than May but 2 minutes shy of his goal of a Boston qualifying time. So both of us were a wee bit disappointed in our results, though everyone else thought we were slightly crazy because our times were good.

After we managed to find our respective families/friends/each other, the next event was the kids run… I mean, the P’tit Marathon. Daniel’s kids and my niece ran this 1 km race – they all did really well and had a great time!

And also on the plus side: shiny new medal3!

It’s a big 25 because this was the 25th running of the Montreal marathon. And for the record, the green bit in between the 2 and the 5 is not a crocodile, as one of my coworkers thought upon first seeing the medal. It’s Montreal island, on which we ran a bunch of the race!