So I’ve been totally slack on blogging about the stuff I’ve learned this year as part of my goal to learn 12 new things in 2017. I’ve been learning stuff, but just not getting around to blogging about it. But I’m on vacay now, so I’ll have time to catch up on all the stuff I meant be blog about! And since I’m on vacation now, I’m also able to read books and finally finished reading the book that my friend Cath wrote: Introducing Epigenetics: A Graphic Guide

Epigenetics is the field of study that is concerned with how things interact with our genes to control their expression. We all inherit DNA, which contains a bunch of genes, from our parents, but there is a whole bunch of complicated things that go on to control how/when/where those genes get expressed (or not). Back when I last took a genetics course – i.e., eleventy billion years ago in my undergrad – I only remember learning about gene transcription (where a cell reads the code in DNA and makes a copy of it in a similar molecule called RNA) and gene translation (where the cell translates the code from the RNA into a protein, which can then go on and perform some function in the body). I also only remember three kinds of RNA: messenger (mRNA), transfer (tRNA) and ribosomal (rRNA). Now there are a tonne of other RNAs – micro (miRNA), long noncoding (lncRNA), and piwi-interacting (piRNAs), just to name a few1. All this to say – a lot has happened in our understanding of genetics since I last learned about it, so this book was great way to get up to speed on a whole lot of learning in a fun way! Also, my copy just so happens to be signed: 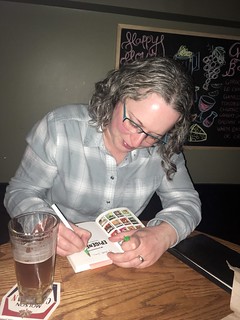 I’m not going to even try to summarize all the stuff that I learned about epigenetics – the book has a *lot* of information and if you want a solid introduction to the world of epigenetics, you should probably buy the book!